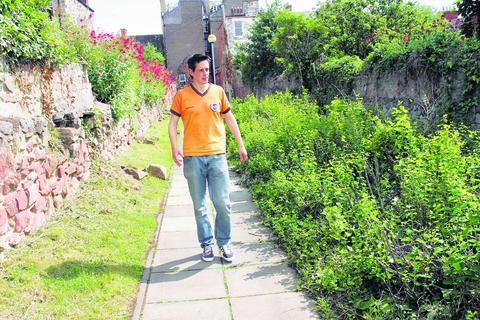 The 1.5-hectare site, to the rear of 72-88 High Street, would be transformed into a community garden to “provide opportunities for horticultural, hospitality and basic skills training, community growing facilities” and a space for holding occasional community markets.

The Ridge (Scotland) CIC aims for the site to “provide a community garden space that will add to the general public amenity in Dunbar and will provide opportunities for other groups and organisations to benefit from the opportunities and facilities the developed site will provide”.

Three temporary buildings – a log cabin, shed and poly tunnel – would be created on the site, as well as a decked platform area to hold markets, potentially 10 times a year.

It is hoped the markets, made up of eight stalls, would be populated by six of the county’s drinks producers, with two producers from outside East Lothian. Visitors could then park in the nearby Co-op car park.

The proposals were lodged with East Lothian Council last month, alongside a series of drawings also included.

An eight-page planning statement also looks at the proposals for the land, which is known as ‘the Backlands’.

According to the document: “This proposal is an opportunity for The Ridge to increase its presence in and around town and boost opportunities for ongoing community engagement on The Ridge’s work and future plans.

“The Ridge are a Community Interest Company and work solely for community benefit.

“This proposal has been funded by the Coastal Communities Fund.

“The site we will take responsibility for and are proposing to develop has so much potential to become a beautiful and functional community space that will provide wide-ranging benefit to the town and opportunities for community and personal development.”

Currently, the site is owned by three different parties, with two areas owned by the local authority.

The report adds: “East Lothian Council has expressed explicit support for these proposals and a lease has been drafted which has to go before the Housing Minister in Scotland for approval.”

Agreements with the Co-op Group and the remaining land owner are currently being drawn up, with leases to be signed.

The document concludes: “This is an important application and proposal, as it is an ambitious attempt to create a beautiful and functional community space that aims to improve existing and underused spaces within the town centre and provide wide-ranging community benefit within backland areas that will otherwise continue to decay.”

Steven Hill, chairman of the group, said there were “mixed feelings” about the proposed development. He told the Courier the idea of clearing up The Backlands and potentially reducing anti-social behaviour in the area had found favour.

However, there were also concerns about competition created by any market, although it could also bring visitors to the town.

A presentation is expected to be made to the town’s community council on Monday.