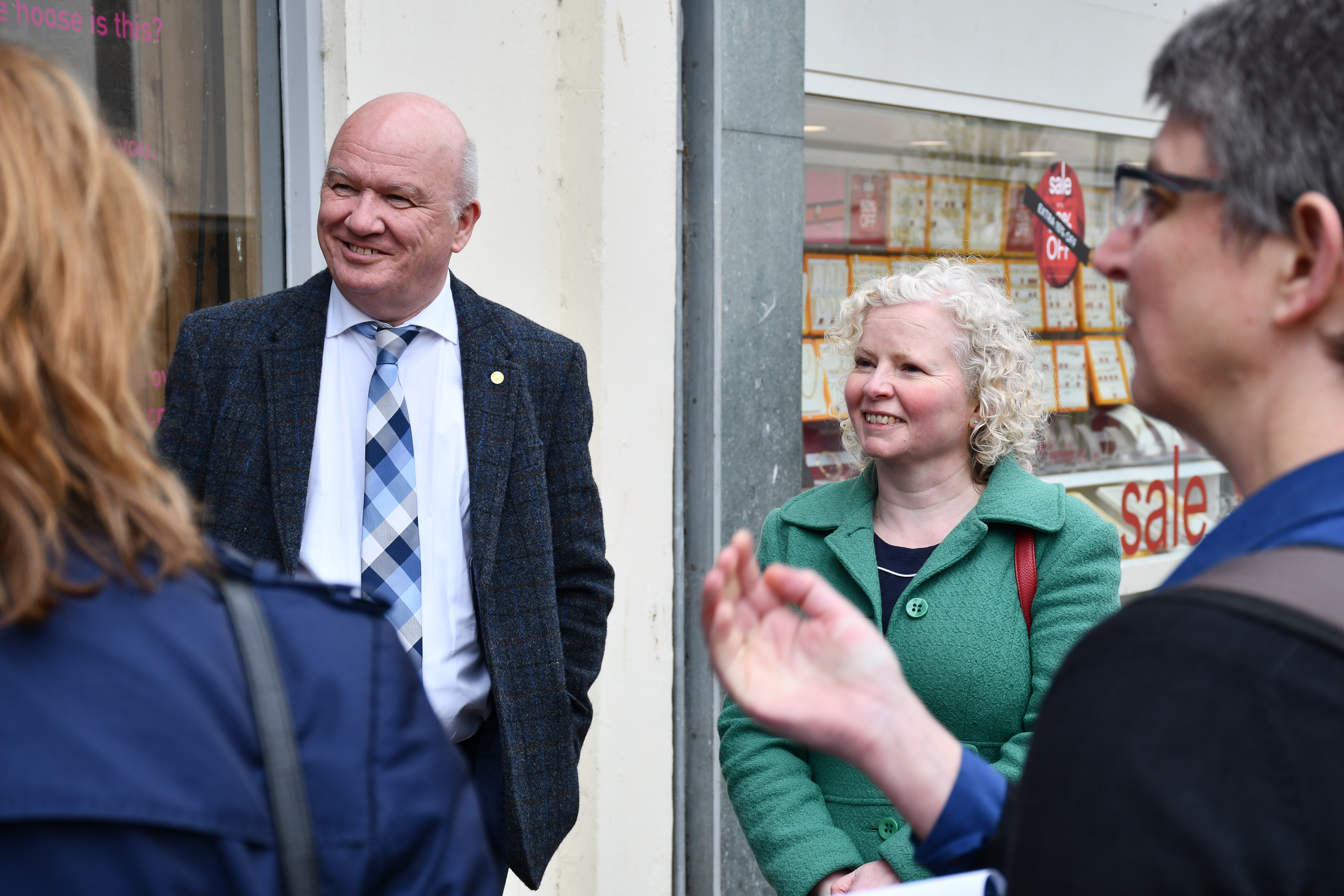 MSPs investigating the future of Scotland’s town centres have been learning how the community-led vision to breathe new life into Dumfries is taking shape.

Members of the Scottish Parliament’s Economy and Fair Work Committee, which is conducting an inquiry into town centres and retail, visited the town today (Monday, April 24).

They saw and heard about some of the regeneration work underway, the ambitious plans being developed and pursued, as well as the challenges that exist in turning them into reality.

To plan the day, the Parliament’s Participation and Communities Team worked in partnership with Midsteeple Quarter, the community-owned organisation which has bought a number of High Street sites and is in the process of bringing them back into use and transforming them, to arrange the visit.

Committee members are working to identify the new realities of retail and e-commerce in Scotland and their impact on town centres.

They are gathering evidence as they explore the policy response needed to create living and resilient town centres.

MSPs were led on a walking tour of the High Street by Midsteeple Quarter Executive Director Scott Mackay, who highlighted not just the vision for the five buildings owned by the community benefit society but other key sites in the area.

Scott  said: “This was a fantastic opportunity for the MSPs to not only hear how the community in Dumfries is uniting to create a better future, but to see the progress we are making.

“We hope that our work and experiences so far can help influence a bigger picture approach to community-led regeneration which helps create stronger and more sustainable town centres across Scotland - communities which put the best interests of their residents first.

“Hopefully we have shown how community ownership can not only bring vacant buildings back to life - providing places to live and work - but creating a springboard for wider successes.”

The tour was followed by a lunchtime roundtable discussion, chaired by Economy and Fair Work Committee convener Claire Baker MSP, in Flourish at 111 High Street.

It was attended by Midsteeple Quarter Chairman Peter Kormylo and Board member Joe McGurk, as well as representatives of The Stove Network, Dumfries Partnership Action Group, The Guild Dumfries, Loreburn Community Council and Dumfries and Galloway Chamber of Commerce.

MSPs were keen to hear the views of local businesses and the community about the realities of retail and e-commerce and how living and resilient town centres can be created.

Afterwards, they called into a number of businesses and attractions to hear further views and experiences. They included The Stove Cafe, Flourish, Lolliography, Circle Vintage, The Wobbly Shelf, Moat Brae and The Big Burns Supper’s new pop-up cinema at Loreburn Hall.

Peter Kormylo said: “We were pleased to be able to support the committee to shine a spotlight on so much of the good work that’s going on here in Dumfries - as well as to highlight some of the challenges our businesses and other organisations face. We hope that they found it helpful.

“We are clear in our belief that community ownership is key to residents reclaiming their high streets, making their town centres better, fairer and more prosperous.

“It’s pleasing to see the growing recognition from across the country that Dumfries is a town to watch for both its vision and progress. We hope that Midsteeple Quarter’s part in that can help unlock something special in the town.”

Midsteeple Quarter recently announced that the contract for its first phase of major construction work had been awarded, with work due to start soon on transforming the former Baker’s Oven site. You can read more about that here.