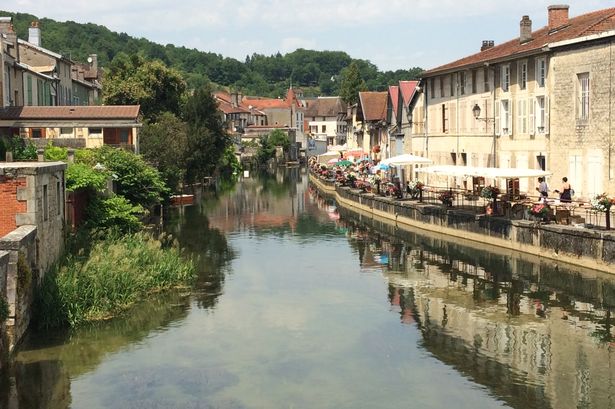 THE skirl of bagpipes might seem a strange sound echoing through any other French town – but not Joinville.

Most Scots will never have heard of this pretty settlement on the Marne but its population’s love affair with Scotland has endured for five centuries.

The reason is Marie de Guise, French bride of James V of Scotland. Again, a name which may be ­unfamiliar to many Scots – but everyone’s heard of her daughter.

Mary Stuart, Queen of Scots, was the product of this Franco-Scots marriage and was brought to Joinville on a visit by her mother.

Marie de Guise’s return to her French family home was recreated this July with great pageantry by its citizens and guests from Scotland.

But long after the Saltire bunting and lion rampant flags have been taken down, a hearty welcome will remain for Scots here.

There are many reasons to head for this less familiar part of France. The Haute-Marne district and wider Champagne-Ardenne region boast history, picturesque scenery, ­wildlife, mouthwatering cuisine and of course the famous fizz.

The champers, wine and beer were all flowing at the festival in Joinville, where Scots visitors also drank in the affection. They came from Stirling, Falkland in Fife, and Edinburgh’s Leith, all places closely associated with Marie’s period of rule in Scotland.

Dr Matthew Shelley struck up a friendship years ago while working for Historic Scotland when he gave a guided tour to a bus party from Joinville who were following Marie’s foosteps through Stirling.

When he was invited to the 500th anniversary celebrations of Marie’s birth, he and his wife didn’t ­hestitate.

Dr Shelley said: “It was a bit quicker and more convenient for us to get to Joinville than it was for Marie de Guise – by Easyjet rather than horseback.”

Dr Shelley said: “She could have justifiably fled home to France but said, ‘I’m going to stay in Scotland and fight.’

“And she did, for many years, holding the country together and charming people with her wit and determination.

“She’s an inspiring figure for modern times.” Wendy Purvis, ­property manager for Falkland Palace, hopes the shared history will encourage Scots to Joinville, adding: “The area is just beautiful, the food is amazing and our hosts have been so generous.”

Charming though Joinville is, there’s plenty on offer further afield. Many of the towns and villages you pass through boast their ­champagne houses offering tours.

Legendary French president Charles de Gaulle lived near Colombey-les-Deux-Eglises and you cannot fail to spot the massive Cross of Lorraine, a 44.3m high version of the emblem adopted by his Free French forces during World War II.

There’s also an amazing memorial centre which sets his life in the context of that era. An “underground” street hides resistance activities from propaganda printing to weaponry, only revealed as you turn each corner.

You feel a chill in your bones as you watch de Gaulle’s funeral, the room temperature replicating the cold of that solemn graveyard day in 1970.

The 18th century philosopher Voltaire lived nearby, at Chateau de Cirey-sur-Blaise, and his mistress was an ­inspirational figure in her own right. The Marquise Emilie du Chatelet not only sheltered her lover sought for treason but devoted her life to science and literature.

A modern woman of character is your host at an ideal base for touring. Nathalie Thuillier worked tirelessly to build a hotel/restaurant into one of the finest in the region. Her warmth, combined with the cooking skills of husband Francois, have created the perfect haven in La Source Bleue.

Superb French gastronomy is served in a converted mill beside a tranquil lake.

As I visited, the Champagne region was awarded Unesco World Heritage status, along with our own Forth Bridge – even more reason to ­experience a place that already has so much in common with Scotland.