By Leigh Sparks (University of Stirling)

Downloadable versions of this post are available here (word) and here (pdf).

The attraction of many international delegates to the inaugural World Towns Summit in Edinburgh in June 2016 was eloquent testimony to the perception that Scotland has led the way in recent years in thinking about and producing action on towns and town centres.  That international bodies selected Scotland as the location and trusted us to deliver speaks volumes about our international reach.

At the Summit, and in the ongoing discussions since, there have been requests to understand what it is Scotland has set in motion.  The danger is that this gets bogged down in detail, so this short, personal, piece is my view of the last 5 years or so.  It is an insider’s commentary (I was on the National Review and am Chair of Scotland’s Towns Partnership), with all the faults that this can entail, but is intended to ‘join the dots’ at a high level.  Figure 1 provides a handy guide to these dots with the detail of the picture drawn available via the hyperlinks.

The onset of the ‘great recession’ in 2007-8 produced visible fault lines and scars across Scotland as elsewhere.  It heightened awareness of, and the urgency needed to tackle the changing nature of place and towns and our economic, social and cultural lives.  This is not to say that nothing was known or being done before this point, and indeed many organisations playing a vital role today were in operation then, or that the recession was the only problem.  But, responses in 2008-11 felt piecemeal and addressed symptoms not the cause.

In 2012, Nicola Sturgeon responded to the crisis in town centres by establishing a National Review of Town Centres, chaired by Malcolm Fraser the leading architect and urban thinker.  Rather than focusing on the symptom – empty shops and a declining ‘high street’ – this review tackled the cause – what are towns for and how do we think about and care about place?

Reporting in July 2013, the Expert Advisory Group focused on the underlying rationale for investing in, and re-energising towns.  The social and economic benefits for all sectors of the population, and the essentially sustainable attributes of towns provide the focus for the recommendations. Under an overarching ‘town centre first’ principle the Review lined up six core themes to be pursued (town centre living, digital towns, proactive planning, accessible services, local economic growth, creative and entrepreneurial places).

To a considerable extent there is not a lot new in these areas, but the Review integrated them and aligned them in such a way as to set up a blueprint for action.  To the Scottish Government’s credit they accepted the Review and in November 2013 published their response and call to action as the Town Centre Action Plan.

There are many implications of this at a detailed level, but in terms of policy implementation the Town Centre Action Plan, in my view, stimulated five lines of activities, sometimes producing new things, sometimes aligning existing approaches.

The first of these was a public commitment, pursued firmly by the Minister, Derek Mackay, with COSLA, to implement the Town Centre First principle, not only for retail but for public and other private investment where possible.  Whilst not formally or legally binding the public nature of the commitment has focused attention and actions to stop developments outside existing town centres, where alternatives are clearly available.

The various themes of the Town Centre Review and the Action Plan also received attention through a variety of demonstration projects, funded in an attempt to work out what could best deliver change against the themes.  In some cases capital investment was made, whereas in others it is pump priming and revenue coverage.  Not all demonstration projects neatly fit one theme, but the intention was to try things and assess impacts.

Fourthly, and in recognition of the fragmented landscape of bodies operating in the broad ‘towns space’, small-scale funding was provided to Scotland’s Towns Partnership (STP).  The aim was to promote STP as the ‘go-to’ body for towns in Scotland, collating learning and activities from others, providing a single voice and amplifying the activities underway, whether undertaken by STP or by other bodies.

Finally, a Cross Party Group (CPG) on Towns and Town Centres was established, chaired by Margaret McCulloch, a Labour MSP.  Meeting quarterly the CPG provided a Parliamentary forum to debate progress and activities following the Town Centre Action Plan.  Attended at least once a year by the Minister, the CPG reinforced the cross party interest and support that towns and the Action Plan had governed.  It provided a more continuing forum than the annual Towns debate initiated in the main Parliamentary chamber by the Government.

One of the key tenets of the Action Plan was that there is no easy top-town solution to towns and that places are very distinct if not unique.  As such, towns need to be able to understand themselves by self-analysing their situation, assets and opportunities.  Allied to a focus on community and the need for community ownership of the issues and solutions, support was given to a series of tools and mechanisms to aid understanding and change.

A number of tools have emerged from this investment including the Towns Toolkit, The Place Standard, Understanding Scottish Places (USP) and various Town Audit approaches.  Consistent approaches and applications of these tools provides a focus for self-analysis of places and towns and provides a method of beginning conversations about change.  In many cases these conversations have been enabled via an enhanced programme of local charrettes, as a new engagement focus.

Mechanisms to enable change in some cases pre-dated the Action Plan, but received a new stimulus and focus from it.  Business Improvement Districts and Development Trusts are mechanisms that enable new management or assets and places and have expanded since the National Review.  More directly political, the community focus was legislated via the Community Empowerment Act which gives various rights to local communities and helps asset transfer and ownership for community and social good.  The rise in interest in social enterprise, crowd-funding and social investment schemes have assisted in this.

With all this activity and various towns across Scotland trying different things to meet their needs, there is a real question over the impact of the Town Centre Action Plan.  Recognising this, the Government produced, in November 2014 and November 2015 respectively, the Town Centre Action Plan One Year On and Two Years On.  These capture and describe much of what has been taking place generally and specifically through demonstration and other projects.  Each publication has been the subject of a parliamentary debate on the broad topic of towns.  A more formal and structured impact analysis of these activities is currently (summer/autumn 2016) underway within the Scottish Government.

Our towns and town centres have been steadily altered by decentralisation and changing economic, social and technological capabilities and behaviours.  This has been going on for at least 50 years and has culminated in our present situation.  Scotland is not unique in this.  Expecting radical transformation and reversal of these macro-trends in the short time since 2013 is clearly unrealistic.  But where Scotland is distinct is in having a coherent, aligned and formally recognised national plan for how to attempt to reverse the situation, by placing community at the heart of the process.  There remains much to be done but the World Towns Summit was recognition that the first steps have been made and potentially provide lessons for others.

All this effort has gone on in the knowledge that some macro-economic alterations might help the processes, but they have not yet been politically achievable.  Two particular examples are the self-imposed Scottish Government restrictions on non-domestic rates alterations to assist town centres and the (reserved powers) of setting different VAT rates on redevelopment and new build or spatial areas.  There are other levers which might become available to the Scottish Government, and as new post-Brexit and post-election thinking addresses issues of local and other income and taxation, other opportunities to support town centres may emerge.  We are at the start of a journey, with a lot to do, but at least in Scotland we have a road-map or a sat-nav.

Leigh Sparks is Professor of Retail Studies and Deputy Principal at the University of Stirling, Stirling, Scotland. He is also Chair of Scotland’s Towns Partnership and IDS Ltd (the Business Improvement Districts Scotland Company).

Figure 1: From the 2013 National Review to the Present Day 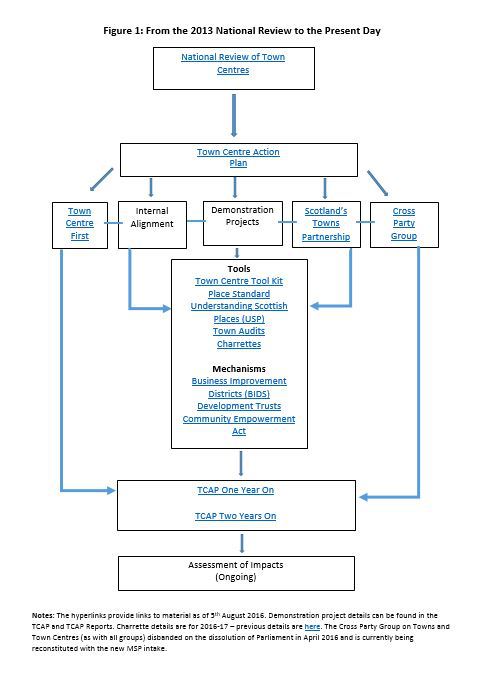