Scottish Towns Invited to Get Creative in the ‘FutureTown’ Design Competition

A national design competition inviting people to submit innovative ideas for positive change in their town or city neighbourhood has been launched today. 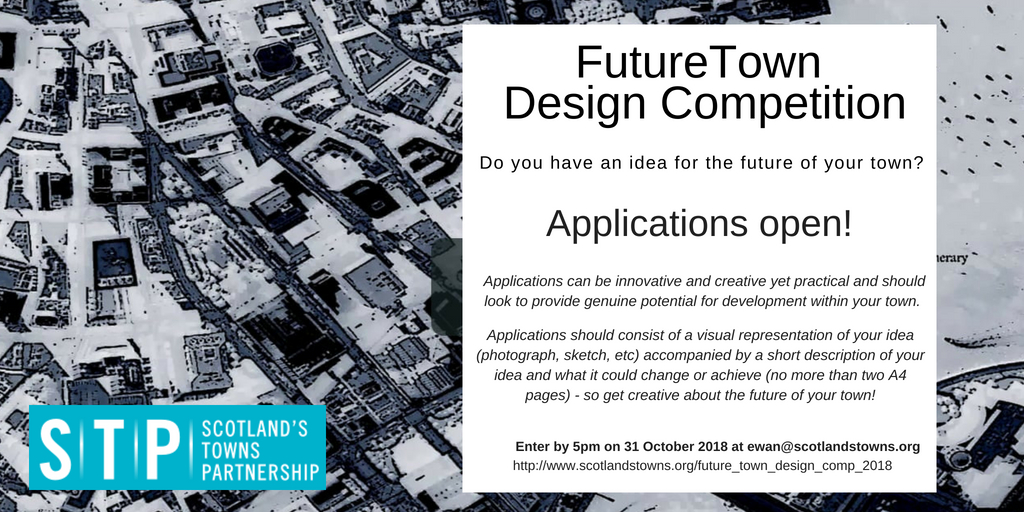 Now in its fourth year, the FutureTown Design Competition is aimed at provoking ideas and encouraging new approaches to highlight what the country’s towns could look like now and in the future.

Organised by national agency for towns, Scotland’s Towns Partnership, the winner is chosen by the public through an online vote. Entries gain significant media attention for their local communities, while representatives of the winning design are invited to present their idea at a high-profile event with town and policy stakeholders.

Since its inception the competition has received a rich variety of innovative yet practical ideas promoting positive change in areas such as the local environment, the public realm and accessibility, low carbon and sustainable living, digital technologies and tourism, arts and culture, history and heritage, and health and well-being.

Last year’s winners Paisley Community Trust captured public attention with their ‘Baker Street’ proposal for a new cultural and creative quarter in Paisley town centre. This would include a community-led performing arts and film theatre and a Performance Academy.

With no formal application to fill out, entering the competition is straightforward. Individuals or organisations can send a visual representation of their town or idea (such as a photograph or sketch) and a short written description to Scotland’s Towns Partnership, at: [email protected]. Applications close on Wednesday 31 October 2018 with voting held during Scotland’s Towns Week, November 2018. Full information can be found on the organisation’s website.

Scotland’s Towns Partnership advises that entries can be innovative and creative yet practical and should look to provide genuine potential for development within the town. Whether a building redevelopment, cultural initiative, transport feature, digital service, unique bin design, or a new use for existing public or vacant space…entrants are encouraged to think outside the box!

Gary Kerr, Chair of Paisley Community Trust, encouraged those with ideas for their town or community to get involved in the competition:

“Entering the competition in 2017 was an opportunity to raise the profile of Baker Street nationally, benchmark against other exciting regeneration ideas for towns across Scotland, and await public feedback. We were delighted with the result! Our profile and social media statistics during the voting period were some of the largest we have seen”.

“Baker Street has certainly captured the public’s imagination - winning gives us confidence we are getting things right and the community are right behind us. If you have an idea that would make your town better then you should enter, we’d encourage you to take part”.

“This competition highlights how much grassroots creativity and potential exists for initiatives that contribute to wellbeing, inclusion, prosperity and environmental sustainability in our towns and city districts. In the face of demographic, technological and economic change, communities are able to showcase forward-thinking ideas and projects which point to how our town centres can be thriving places to live, work and socialise in for many years to come”.