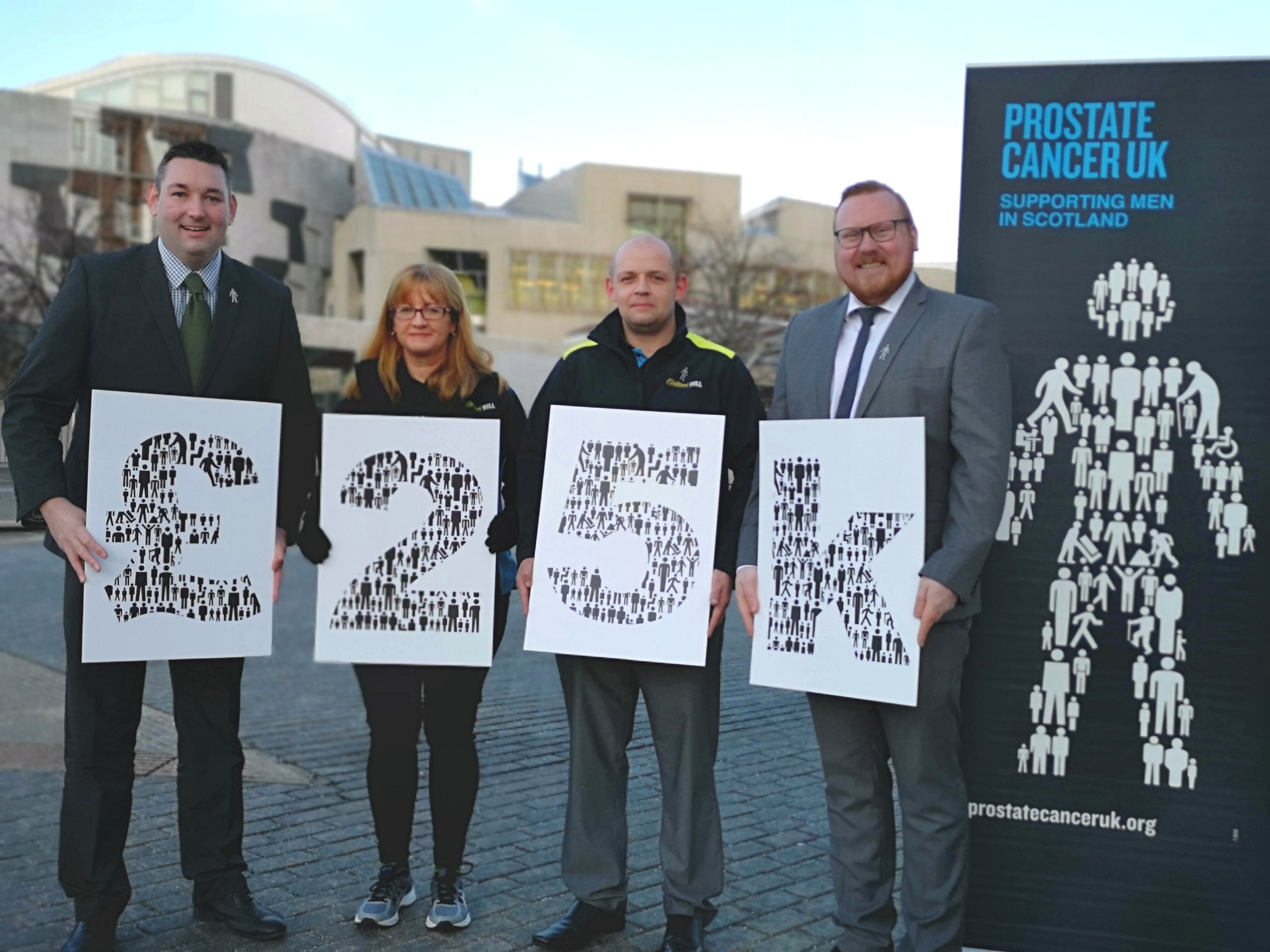 During the campaign, prostate cancer information leaflets and posters were distributed to shops, staff received training on key prostate cancer messages to bring up in conversation with customers and volunteers from Prostate Cancer UK, who have lived or are currently living with the disease, visited shops to talk to staff and customers about their own experiences.

• 5,000 Prostate Cancer UK 'man of men' pin badges were sold in shops, raising £10,000
• A further £15,000 was raised by William Hill staff through charity fundraising including kilt walks, football and golf tournaments and a sponsored climb of Ben A’an
• 5,000 information cards were distributed across all 310 William Hill shops
• Visibility at some of Scotland's major football events including the Scottish Cup

Kathleen Feeney, Volunteer Engagement Manager, at Prostate Cancer UK, said: “Prostate Cancer UK’s ambition is to stop men dying from prostate cancer and to achieve this it is crucial to reach as many men as possible to help raise awareness of their risk, and raise funds for vital research. Partnering with William Hill has provided us an opportunity to get these important health messages out to many men in Scotland whilst raising funds. We thank all those involved at William Hill for making this partnership a success, and taking us a step closer to beating prostate cancer.”

Garry Fenton, Regional Manager for William Hill, added: "We know of customers who were prompted by the campaign to speak to their GP and who are now receiving treatment for prostate cancer. In the longer term, many more will likely do so. That is a legacy the William Hill team can rightly be proud of. However, prostate cancer is predicted to become the most common of all cancers in the UK by 2030 so it is vital that we continue to raise awareness about the disease.”

Donald Morrison, spokesman for ABB Scotland, said: “This campaign demonstrates how betting shops can play an important role in promoting health messages and sparking conversations with customers that could ultimately save their lives. We are delighted to have supported this innovative campaign.”

Mr Briggs, Shadow Health Secretary and Co-Convenor of the Scottish Parliament’s Cross Party Group on Cancer said: "This is a truly remarkable achievement by William Hill staff who should be warmly congratulated for the success of the joint campaign with Prostate Cancer UK.

“This has been a hugely successful and innovative new partnership between William Hill and Prostate Cancer UK which has seen high quality information on prostate cancer made available in every William Hill shop in Scotland and provided a significant boost to the charity’s fundraising efforts.

“This partnership is doing a great deal to raise awareness of prostate cancer among men, including those who may be reluctant to go to their GP to discuss health concerns, and this is really important as early detection is vital to ensure the highest possible chances of successful treatment.

“Public health campaigns like the joint campaign between William Hill and Prostate Cancer in betting shops across Scotland is exactly the sort of innovative approach we need to see in the future to deliver public health information and tackle the many health inequalities which exist in Scotland.”