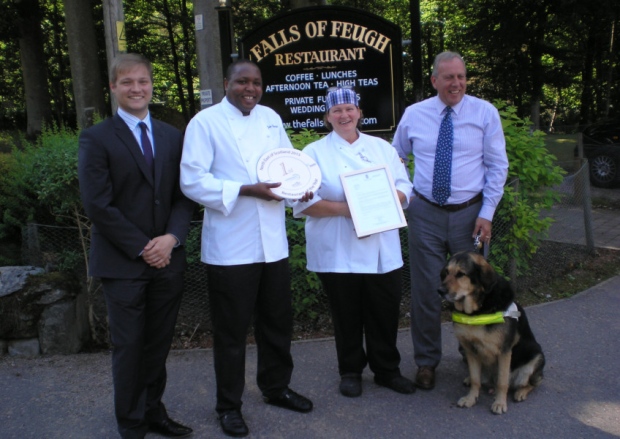 We are already two weeks into our Parliamentary recess, and I have been enjoying the fantastic weather which I have been experiencing while out and about across the constituency.

Last week, in conjunction with Aberdeenshire Council and the Scotland’s Towns Partnership, I visited both Alford and Huntly to discuss issues relating to the town centres, and what can be done to ensure they are rejuvenated and well used.

In Alford, unsurprisingly, one of the biggest concerns which many business owners raised with me was the upcoming closure of the local Royal Bank of Scotland branch. Customers now face significant journeys if they wish to use an RBS branch, as opposed to the mobile bank, and it was stressed to me how big an impact the loss of the night safe would have on the local business community.

My colleague Stuart Donaldson MP and I have requested a meeting with the Chief Executive of the RBS Group to discuss the matter, and I also hope to arrange for a senior representative from RBS to come to Alford to a public meeting to ensure that all concerns can be addressed directly, in the hope that some reassurance can be given to all local customers.

Last week Tesco were holding their sixth Neighbourhood Food Collection, in conjunction with the Trussell Trust and Fare Share. I visited the Huntly store to hear how the new Foodbank there was working and to make some donations, however stores in Banchory and Westhill were also holding collections. This collection will continue for two weeks in some of the smaller Tesco stores, and is a permanent fixture in some of the larger stores.

I still find it astonishing that foodbanks are necessary in this day and age; even more so that usage is increasing, with figures from the Trussell Trust show that the number of people using them is expected to pass the one million mark across the UK. Whilst making my donation last week, I was particularly concerned to hear that a large proportion of those using foodbanks are the working poor.

At the time of writing this, we have not heard to details of the first Tory budget since 1996, however there are predicted to be further savage cuts to the welfare state, with woman being particularly hard hit. Such decisions cause real hurt to working families and vulnerable people, and yet the Tory Government refuse to listen. During debates held on the Scotland Bill at Westminster, the SNP group have raised a number of amendments to give the Scottish Parliament extra powers in respect of welfare, but every one was vetoed.

I recently held my first joint surgery with Stuart Donaldson MP at Kirkton Hall in Durris. There we met with the new owners of the Fife Arms in Braemar, who told us about their renovation plans for the Hotel. They also held a consultation into the work on Saturday, and I understand that their plans have been very well received and welcomed locally. I look forward to visiting the Hotel once the work has been completed.

Following this, Stuart and I visited the Falls of Feugh restaurant, which recently won the accolade of Restaurant of the Year at the North East Scotland Chef and Restaurant Awards. It was great to meet with the owner, and award winning chef, John Chomba, to hear more about how he uses has vast experience and local ingredients to create a great menu which showcases the best of Scottish produce.

As the Scottish Parliament is still in recess, I have more time throughout the week to visit local areas and groups. If you would like me to visit a group or project which you are involved with, please do not hesitate to contact my constituency office, either by telephone on 01467 631364, or by email to [email protected]