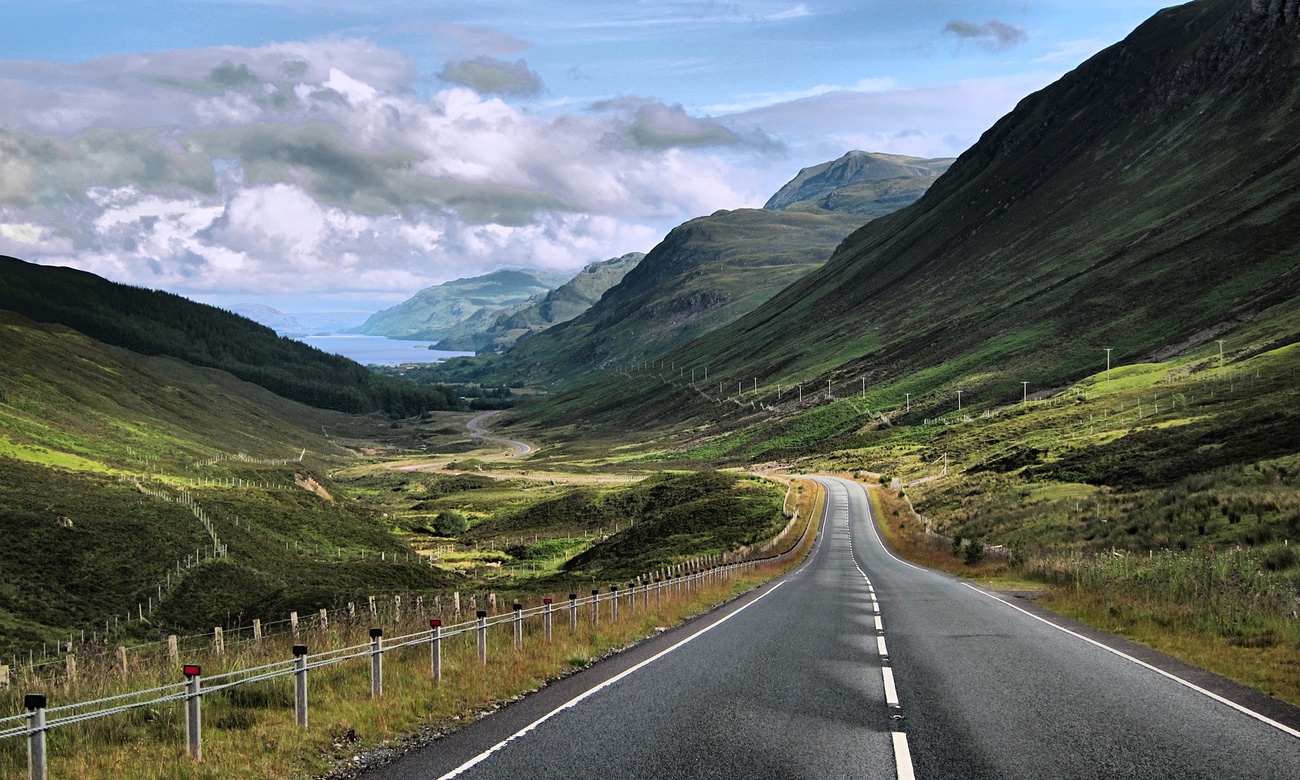 The term “road trip” has the roar of a Chevrolet, the lure of never-ending Californian freeways, and nuances of the wild freedom of Beat writer Jack Kerouac. But here we were in the Highlands, about to embark on the recently launched North Coast 500, a new coastal route billed as Scotland’s answer to the US Route 66.

It forms a loop around the whole northern tip of Scotland, from Inverness, close to our home, to John O’Groats in the north-east, along the stark sea of the north to Durness, then down the convoluted west coast before turning inland at the Applecross peninsula. The itinerary was designed by the North Highland Initiative, a non-profit organisation established by Prince Charles to spread the love across less-visited parts of the northern Highlands.

Tony, my partner, and I packed the dog in the old Land Rover, and waved goodbye to Inverness, which, despite looking like a sprawling 1960s experiment, still has the edge of a frontier town.

The plan for the first leg of our four-day jaunt was a 100-mile drive to Wick, through the county of Caithness, passing the fertile flanks of the Black Isle on our right and towering Ben Wyvis to our left, and then Cromarty Firth, where we saw our first and last seal. The Highlands are synonymous with wilderness, but there’s also a great deal of the human world as you head north. There are Pictish trails with enigmatic stone engravings from the early middle ages, and the hills over Cromarty Firth are rumoured to contain second world war storage depots accessible only from the water. It’s the deep waters that make this a strategic coast. Where there were once war ships, there are now oil rigs. North of Dingwall, the Storehouse of Foulis, built in 1740, is now a gourmet cafe and farm shop, but was once a warehouse for the oats and barley tenant farmers paid to the landowning Munro family as rent, which was then portioned out to the estate staff as wages. 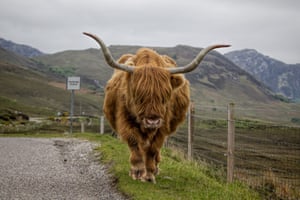 Heading north past the Royal Burgh of Tain the geographic mood remained pastoral, but on Dornoch beach, I felt the landscape shift into ruggedness. The thrill of the true open road began.

Huge Dunrobin Castle, near Golspie, must be seen, for its park, its falconry displays, and its original 13th-century keep, which stood abandoned for 200 years until it was integrated into the 17th-century French-chateau-style extension. One of the castle’s owners, the third Duke of Sutherland, added a rather chilling exhibition of the world’s fauna (or pieces of them anyway, shot by family members on safari): giraffe torsos, elephant tails, gorilla hands. 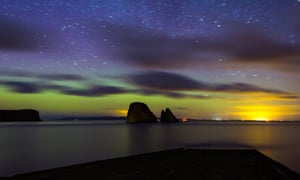 The northern lights over the coast of Caithness. Photograph: Graham Mackay

A few miles on, the air of freedom in the village of Brora (known for the fine cashmere jumper brand) acted as a fine antidote. And we went on to spy stacked lobster cages in Portgower, the immense open expanses of Sutherland away to our left, and endless walls of Caithness flagstone. We stumbled over the ruins of Badbea village, once a clifftop croft built by families evicted from their land during the 18th and 19th century Highland Clearances.

The ghostly harbour in Wick, on its eponymous estuary, once bristled with the black sails of herring boats. Driving into town, we were overtaken by Alan Sugar in his Rolls Royce, and saw a man walking his dog, with lipstick on. The man, not the dog.

“Welcome to Wick,” Tony said to me. “The Wickers accept everybody.”

Even royals, it seems. round the corner, past John O’Groats, is the Castle of Mey which was saved from dereliction and restored by the Queen Mother, who owned it from 1952-1996. 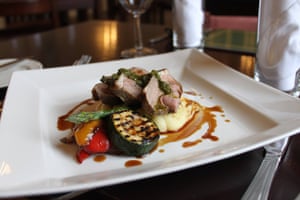 The first night’s dinner was the best of the trip, in Wick’s riverside Number 1 Bistro, part of the posh but unpompous Mackay’s Hotel, where the scallops were silky and barley with fresh beans even delighted my carnivore partner. The next morning the dog pulled us through the harbour, which has memories of Wick life engraved on walls and paving tiles. We wandered among warehouses with empty windows – it was almost like being in one of L S Lowry’s 1930s Wick paintings.

Our next night’s stop was Lochinver, 150 miles away on the west coast. The route took us past the ruined castle of Sinclair Girnigoe on the cliffs north of Wick, and the remains of what looks like a second world war landing strip. Iron age brochs, medieval keeps, military outposts – the east coast of Scotland has always been strategic.

Then it was a heart-stopping descent into John O’Groats, with Stroma and Orkney visible across the water, and on westwards to the wonderful and improbably large dunes of Dunnet Bay. 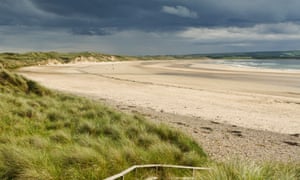 We were now on the north coast, heading for Durness. We passed the poignantDounreay Atomic Reactor, in the process of being decommissioned, and Tony recalled the mid-1980s when “girls in short skirts” showed visitors around, and this was the future.

I relished this leg of the journey: in the north we were at our most remote. Motorbiker gangs were our only road companions. As Ben Hope and Ben Loyal loomed ahead, “SLOW LAMBS” signs appeared, and then came scattered Durness, where every house is lonely and every beach beautiful, none more so than Smoo cove, with its boat ride into the batty cave for those who want to be spooked.

Just before Durness, in Laid on Loch Eriboll, we stopped at Lotte Glob’s stunning sculpture croft. A cult ceramic artist and the daughter of Danish anthropologist Peter Glob, she moved here half a century ago. Fans travel across Europe to buy her work. Lotte is the Highlands: when she goes trekking she disappears for weeks, and you see that in the ecstatic geology of her work. “But you have to do the road alone,” she smiled. 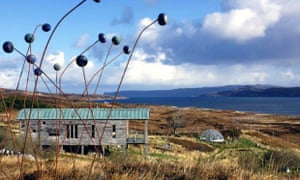 Leaving Cape Wrath behind, we turned south down the west coast. After the stunning Kylesku passage, between lochs Glencoul and Gleann Dubh, the land is cratered like the Isle of Harris, and we tried to count the 35 islands visible out to sea without falling off the road. Inver Lodge Hotel, sitting above the sea with its Chez Roux restaurant, was another world – a fairly conservative one. The warm service and Scrabster salmon were highlights.

On day three, the road to Gairloch (91 twisting miles from Lochinver) was busyish with Swiss cyclists and German and Dutch caravans – the extreme west coast is beloved by travellers, Europeans more than Brits, it seems. We saw where Loch Ewe and Loch Maree were separated by glaciation, and were always looking down into a precipice like the Corrieshalloch gorge south of Ullapool. Across Little Loch Broom, we glimpsed the off-grid community of Scoraig, reached by boat from Badluarach. In Gairloch, the Mountain Coffee Company was abuzz with travellers and from our romantic balconied room (no 10) at the Old Inn, we watched the river meet the sea before setting out to walk those beaches and feel things fall into perspective. 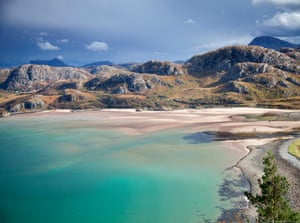 The beach near Gairloch, where ‘everything falls into perspective’. Photograph: Planet Pictures/Corbis

The last day’s drive, 100-plus miles back to Inverness, was marked by the Torridon massifs and the top of Scotland’s scariest road – the Bealach na Bá pass from Applecross (not for vertigo sufferers), where we met an electric storm and a couple smoking a joint. After the denuded west coast, eastern Ross-shire felt lush and warm like a homecoming.

As with writing a poem, you don’t complete a road trip – you just abandon it. In our case, on a Sunday, when petrol stations were closed but the road to the north was still gloriously open.