Installation begins on project to light up city centre streets 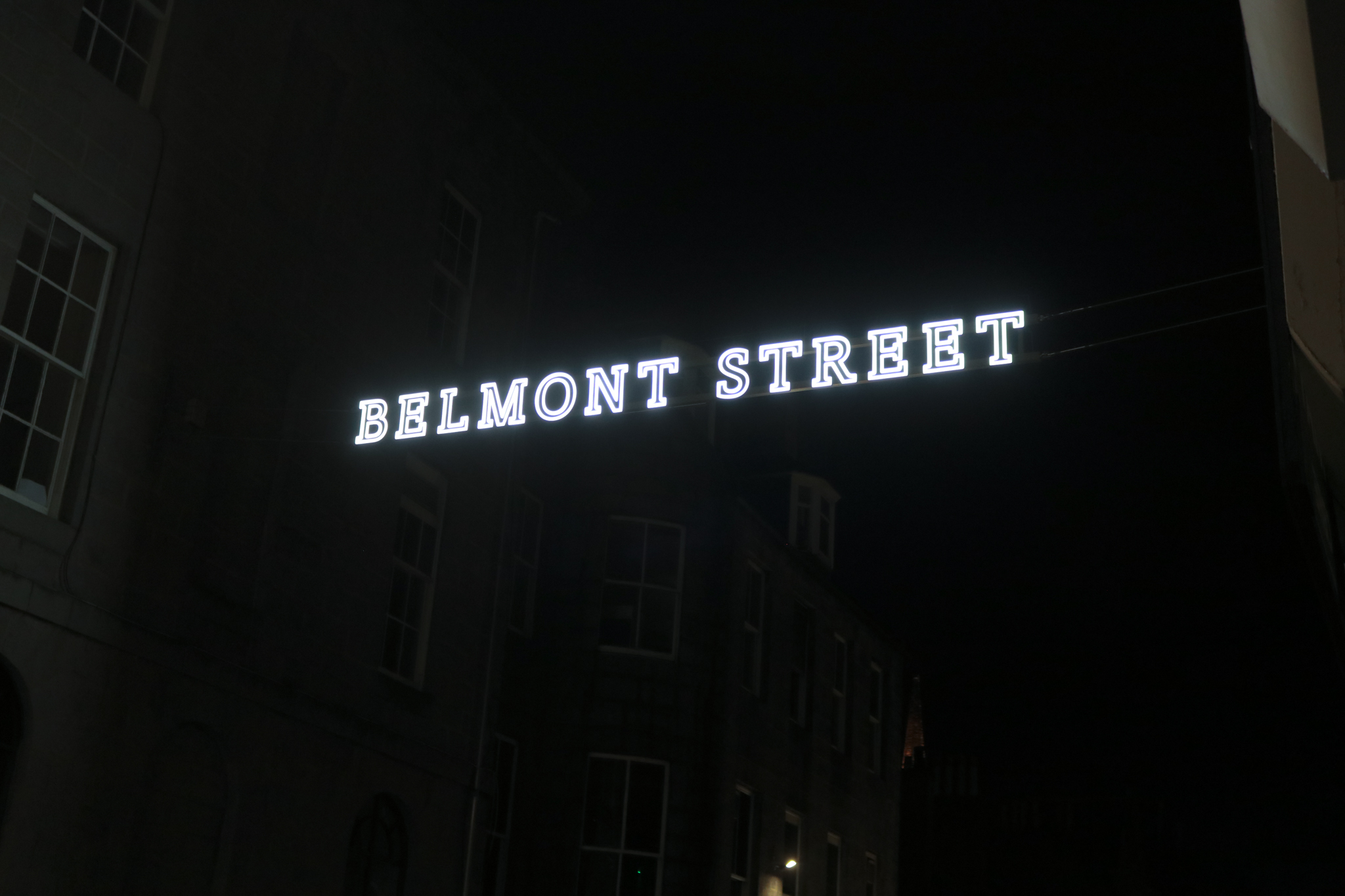 Work has begun on the installation of a creative suspended signage project in Aberdeen.

lluminated street signs will soon be in place at locations across the city centre, to highlight some of the city’s key areas and to enhance the wayshowing offering.

It has been made possible due to funding secured by Aberdeen Inspired from the Scottish Government Town Centre Fund in 2019 specifically for the design and install of signs to encourage pedestrian movement within the city centre.

The first signs were installed on Belmont Street and Langstane Place. The remaining signs will be put in place over coming weeks in locations including Merchant Quarter, Shiprow and Chapel Street in the West End.

Adrian Watson, chief executive of Aberdeen Inspired, said: “The suspended signage project is a positive addition to the city centre and it is great to see installation begin.

“Aberdeen Inspired was pleased to secure Scottish Government funding specifically for the delivery of this scheme back in 2019, and after progress was stalled during the pandemic, it is brilliant that it’s well underway now. We need to see much more financial support of this kind coming into the city in support of the ambitions held in the city centre masterplan.

“As we continue to navigate through the recovery period it is more important than ever to highlight what the heart of Aberdeen has to offer. We’re keen to encourage people, whether local or visiting, to explore the city and support local businesses. The suspended signage scheme assists in making the city safer and more welcoming to visitors, as well as building on the identity of the city centre.”

Councillor Marie Boulton, spokesperson for the City Centre Masterplan, said: “The regeneration of the city centre continues and we can all look forward to the added vibrancy the suspended signage will bring. By investing in infrastructure and through working in partnership with organisations like Aberdeen Inspired, we are creating a dynamic, inclusive destination for people and businesses. With Union Terrace Gardens undergoing its own transformation and Provost Skene’s House about to re-open, the council is showing what’s possible when you commit to a vision.”

The installation of the first of the signs has been welcomed by neighbouring local businesses in the city centre. Gavin Bain, Managing Partner of Gavin Bain & Co, which is adjacent to the location for the West End illuminated sign, said: “We are hugely supportive of anything that will help attract more people into the city centre. It is great to have a creative project like this in the West End and the sign will be a fantastic enhancement to the area.

“Efforts like this in combination with other developments, such as the announcement of Shell moving into the city centre, will make a big difference in bringing more footfall in and with that a positive knock-on effect for local businesses.”

Robert Fraser, Senior Partner at Aberdein Considine, added: “The suspended signs are a fantastic addition to the city centre and will brighten up our main routes as the dark nights draw in.

“They will greatly improve the character and appearance of Union Street and make a meaningful difference to the streetscape, especially in the evening and night time.”

The suspended signs concept aspires to create a series of highly visible, illuminated signs which will draw people’s attention to some of the city’s most renowned streets.

The illumination on the signs will be seasonally adjusted and be visible from late afternoon or evening until the early hours of the morning in line with the night time economy.  Exact hours will be refined on a location by location basis, as appropriate. A portion of the Scottish Government funding has been allocated to the long-term maintenance of the signs by local company Scotia Installations.