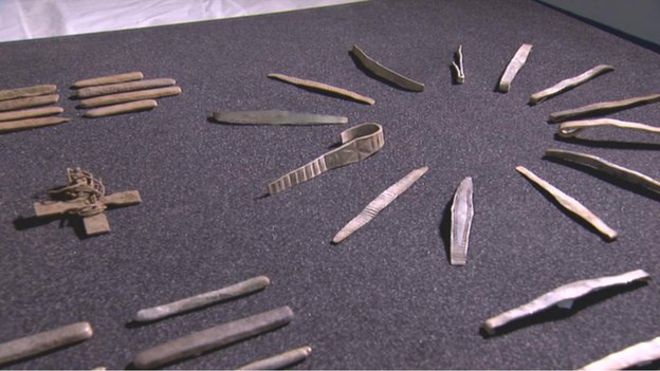 A public appeal could be launched to help raise up to £1m to bring one of Scotland's most important hoards of Viking treasure to Kirkcudbright.

Dumfries and Galloway Council is looking at the possibility of acquiring the collection for permanent display.

It would be part of the proposed development of a new art gallery of national significance in the town.

However, the council said raising the funds for the treasure was beyond its means and would need public backing.

The hoard, which was uncovered by a metal detectorist in south west Scotland last September, is said to be one of the most significant finds of Viking treasure ever made in Scotland.

It includes gold and silver artefacts such as armbands, a cross and brooches.

All accredited museums in the UK can apply to the Treasure Trove Unit to bid for ownership.

Dumfries and Galloway Council is working to try to find £100,000 to kick start a public funding appeal.

The authority wants the hoard to be a focal point for ambitious plans - which are seeking Heritage Lottery Fund support - to transform Kirkcudbright town hall into an art gallery.

It is claimed the Viking artefacts would be a considerable draw for visitors and provide a significant boost for the local economy.

However, the local authority is set to face competition for ownership of the hoard with the National Museum of Scotland having indicated that it also intends to bid for the collection.

It has indicated a willingness to loan out the treasure assuming proper security could be put in place.