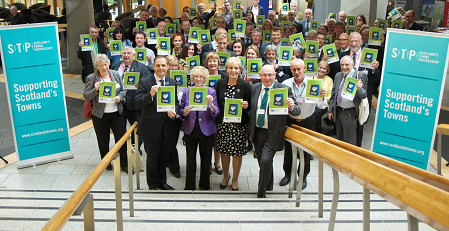 Parliament reception host, Margaret McCulloch and Convener of the Cross Party Group on Towns and Town Centres, said: “Just as rural Scotland and our nation’s cities found their champions in their Scottish Parliament, so too have Scotland’s towns. People with a real passion for their communities are coming together to put Scotland’s towns firmly on the political agenda. As a nation we are getting better are understanding what makes our towns tick and how our towns can develop as vibrant places serving changing communities. Scotland’s Towns Week is an opportunity for us to celebrate our towns and all that they have achieved.”

Campaign organisers and Scotland’s ‘go to’ body for towns, Scotland’s Towns Partnership, promote the Week as an opportunity to raise the profile of Scotland's towns and places through local activity and public campaigning. Last year saw over 50 events take place during the week with Fife Council a leading light; campaigning across every town in their region.

Scotland’s Towns Partnership Chief Officer, Phil Prentice commented on the significance of the Week: “It’s important for towns to celebrate and promote their diversity and richness. Towns are no longer just about retail; they are a vibrant hub where we enjoy culture and leisure, socialise, work, live, do business and set up new enterprise. We call on community groups, businesses and organisations to take part in promoting the best of all they do; helping to support our public appeal to ‘Keep it Local’.”

Abellio ScotRail is supporting Scotland’s Towns Partnership and the Scotland’s Towns Week Campaign. James Ledgerwood, Head of Economic Development said, “We share a common vision of working together to improve connectivity, prosperity, and sense of community.

He added, “We are already rolling out our plans to make local stations a focal point for economic regeneration, working alongside local businesses, community groups and public bodies on initiatives that will make a real difference for town centres and the people who live and work there.”