Merry Christmas from STP: A look back at towns activity in 2016

It has been an exciting year for STP, our partners and Scotland's towns and city districts! Check out the STP 2016 Infograph for what we've been up to. We would like to take this opportunity to thank you for your support and to wish you a very Merry Christmas and Happy New Year.

Here are some of the year's highlights...

The Scottish Parliament's 2016-2017 session brought with it a re-launching of the CPG for Towns and Towns Centres. The CPG welcomed a new Convenor, John Scott MSP and Deputy Convenors Daniel Johnson MSP and Gillian Martin MSP. The latest meeting on 7th December 2016 explored 'Towns Mean Business' with perspectives from ATCM, FSB Scotland, Hargest Planning, Scottish Retail Consortium and CPG members. For more information on the Cross Party Group and to register your interest in attending future meetings, click here.

Towns CPG dates for your diary:

Congratulations to all SURF Award 2016 shortlisted entries and winners. STP supported the Scotland's Most Improved Town Award category, which was won by Lochgelly. Named ‘Britain’s worst place to live’ in 2004, the former mining town has been transformed by a series of ambitious and collaborative initiatives in recent years, enhancing its physical appearance, pride of place, and reputation.  Read more about the SURF Awards.

On Wednesday 9 November 2016 in the 'Lang Toun', Kirkcaldy, 150+ towns practitioners, agencies, community groups and organisations from across sectors got together to discuss how towns can unlock their potential through partnerships and inclusive growth. The largest annual gathering for all those passionate about town regeneration and improvement in Scotland was hosted by Fife Council, and welcomed a fantastic range of speakers including Lesley Riddoch (Conference Chair); Minister for Local Government and Planning, Kevin Stewart MSP; Professor Jarmo Suominen, Aalto University Finland; and Kelvin Campbell, Founder, Massive Small to name just a few. Check out our multimedia report from the day below!
Read Scotland's Towns Conference - Unlocking the Potential of Scotland's Towns Storify Report

*Could your town host Scotland's Towns Conference 2017? Register your interest with Elaine Bone.*

The winner of the 2016 FutureTown Design Competition, following voting online and at Scotland's Towns Conference, was Fort William Town Team. The group envisioned a number of ways to encourage marine tourism in the area, including the construction of semi-circular balconies over Loch Linnhe, and a new sheltered performance space in the town centre. Congratulations to them! Read more about the FutureTown Design Competition. 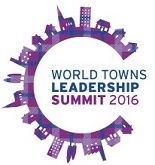 International town and urban leaders came together in Scotland for a world first in June 2016.  Organised by ATCM, BIDs Scotland, IDA and Scotland’s Towns Partnership, the World Towns Leadership Summit discussed the evolving nature of civic governance and the changing economic drivers for successful place-making across the world.

We will continue to build on new and existing partnerships to develop supports for towns but here are a few highlights to look forward to:

Wishing you a very Merry Christmas and a prosperous New Year from all at Scotland's Towns Partnership.