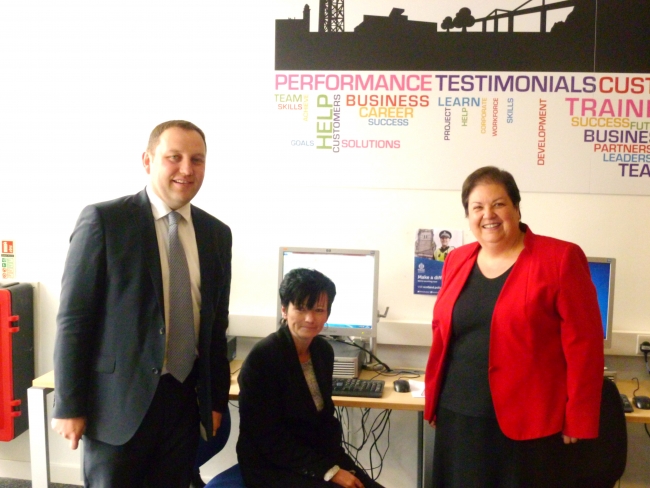 The hub, was the first of its kind in Scotland to divert young people away from the traditional job centre and into a one-stop shop jointly run by the council, West College Scotland, and the DWP.

The council has hailed the centre as such a success and the Hub has now been opened up to cater for all ages.

The City Deal package was also on the agenda and Jackie Baillie MSP and Ian Murray MP discussed West Dunbartonshire Council’s proposal to transform the former Exxon site near Bowling creating new industrial and commercial development space, together with a relief road for the A82.

It is estimated that once complete, the £28 million investment could support up to 690 full-time jobs.

On a walkabout in Dumbarton High Street the Shadow Secretary of State for Scotland spoke to shoppers about the plans to increase footfall in the town centre by relocating over 500 council employees to new offices on the old Dumbarton Academy site.

Mr Murray said: “Too many people in Scotland are struggling to find long-term paid work so I was pleased to hear about West Dunbartonshire Council’s ambitious plans to use the City Deal to create up to 690 new jobs.

“Together with the council’s work with employers to create jobs and training opportunities, this will hopefully have a positive impact on the economic outlook for Dumbarton and the Vale of Leven.”

Ms Baillie added: “Projects like the City Deal and the transfer of hundreds of staff into the town centre are vital to the future success of Dumbarton and West Dunbartonshire as a whole.”