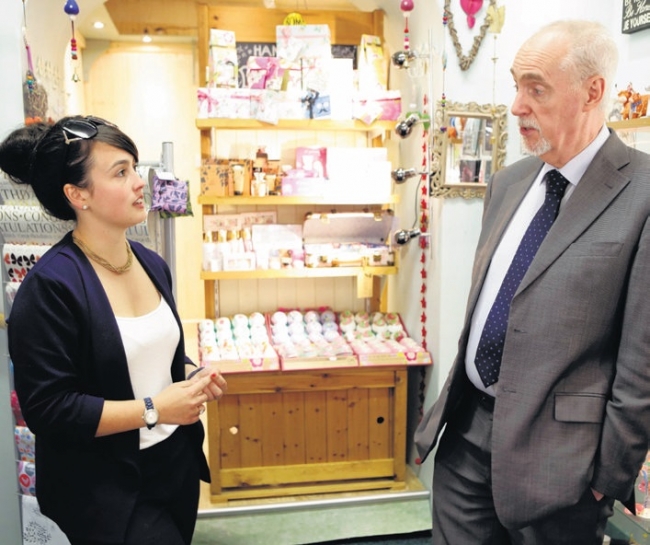 MSP Hugh Henry was left in no doubt about the enthusiasm and determination of the people who are currently involved in a project that aims to drive the local economy to new heights.

During a tour of Main Street and Cross Arthurlie Street, the Labour politician was given an insight into plans for a Business Improvement District (BID), a project that promises to deliver new opportunities for businesses and customers alike.

The Renfrewshire South MSP heard how the BID framework has been used to enhance town centres, tourism or business parks with successful examples bringing a range of improvements such as better safety and security measures, community events, marketing and loyalty schemes, all of which can drive footfall and attract more investment.

The time Mr Henry spent chatting with the people at the heart of the initiative was enough to convince him the town centre has a lot to gain from following in the footsteps of neighbouring towns like Giffnock, Clarkston and Paisley.

He said: “I’ve seen how much a BID can improve a town. Such an organisation can bring real, tangible benefits to businesses and the community.

“When you look at the work that East Renfrewshire Council has done in Barrhead, with the regeneration of the town, it is amazing.

“The Main Street is transformed, the new Barrhead Foundry looks absolutely fantastic and there is a real air of positivity.”

After a short photo call outside the Barrhead Foundry with the BID steering group, the first port of call was Lee’s Newsagent on Main Street, recently re-branded as a Keystore.

Kelly Narwan took five minutes from serving a steady stream of customers to talk to the visiting MSP, and spoke candidly about competing with the nearby Asda supermarket.

She said: “We have been doing a lot to try and compete, from introducing a lot of new deals on things in the store to working with our suppliers to try and bring down costs at the customer’s end.

“And our suppliers have been very good with us, they understand the situation too.

“We still have good footfall in the store, and we have been in the town long enough to know all of our customers on first name terms.”

Mr Henry then raised an issue that’s a bone of contention for many Main Street businesses and shoppers: anti-social behaviour.

However, Kelly said it wasn’t a major issue for Lee’s, adding: “We don’t get a lot of that in here, it seems to be the other end of the Main Street that’s mostly affected.”

It’s noted that behind Kelly there’s a shelf stocked with sausage from Neilston butchers RS Dunbar, and the shopkeeper is quick to stress the value she places in sourcing local produce.

Both Kelly and her husband, Peter, are members of the BID steering group, and so it’s no surprise they share the view it has enormous potential.

However, it’s not only small, independent businesses who see the BID in a positive light.

David Greer, a pharmacist of 35 years, talked at length to Hugh Henry, who quizzed him on the company’s responsibilities in relation to methadone distribution and the future of the business.

Mr Greer said: “I feel the future of the pharmacies lie in vaccinations and minor ailments treatment.

“Not many people realise that they can come here for these kind of things, but we have the power to prescribe medicines for minor things.

“We want to be a part of the community, if you bring your child in we don’t want you to just buy a bottle of Calpol, we want to have a chat with you, help find out a bit more about why your child is unwell and maybe offer a more suitable treatment.”

On the subject of methadone prescriptions, Mr Greer says they have seen the level of subscriptions stabilise.

He said: “We haven’t seen a rise in a while now, I think it’s a sign that there are less of these drugs on the street.

“For all these reasons we want to be more involved in the community.”

Outside Boots, Henry paused for a moment with the president of East Renfrewshire’s Chamber of Commerce, John F Hamilton.

Both admired the opposite side of the road, where the Barrhead Foundry and council offices sit, before turning to the facade of the Main Street shopping centre, which has a little less sparkle.

Mr Hamilton said: “I would love to see this refurbished, it’s a big let down on the Main Street.

“A lot of work has gone into the area, and this is a big let down.

“But it can be difficult to get private owners to agree to things — maybe this is the kind of thing that a BID could get involved in.”

The MSP nodded his agreement, saying: “ERC’s work on the Main Street in Barrhead has been incredible, they have invested millions.

“But when you come and see this it can be a let down.

“I would urge the private owners to invest — it will help their own investment thrive.”

He has high hopes that the BID will come to fruition and significant benefits will follow.

He said: “It allows businesses to work together across the board, presenting a united front to face issues affecting us all in the town.

“Companies working in similar fields can drive down costs, we can encourage our employees to use other BID member’s shops — the possibilities for cultivating business in the local area are endless.”

Project co-ordinator Laura Molloy, of Giffnock-based RPL Marketing, has been recruited by East Renfrewshire Chamber of Commerce to help establish the Barrhead BID, working in tandem with local business owners.

As part of the BID process, shopper and business surveys have been carried out with the intention of producing a business plan that will be presented to companies and organisation operating within Main Street and Cross Arthurlie Street.

If the majority of businesses back the proposals, a five-year strategy will be adopted in the same way that BIDs have been in operation in neighbouring Clarkston and Giffnock.

The business plan is financed by a levy on firms within the BID area, with the possibility of additional contributions coming from local and national government as well as other agencies.

The ultimate aim is to create a strong local partnership which sees the private sector collectively shaping the town centre economy for the benefit of all interested parties.

Doreen Rennick, co-owner of the Knitting Bee, admits that she has had to make several sacrifices to reduce overheads in recent years, including scrapping her store’s broadband services.

However, a surprising rush in popularity amongst youngsters is continuing to drive footfall in her store.

The walls of the store are stacked with a dizzying array of wools and yarns in a myriad of colours.

Mr Henry’s question to Doreen is a simple one: “How is business?”

“Summer is my quietest time, during the school holidays a lot of people put away their craft things for the holiday.

“But we maintain a steady footfall with people coming in and out all day.

“We have men, women and even school kids coming in here, and Barrhead High School has recently started a crochet and knitting club.

“Crochet especially is very twee right now amongst younger people, and we are one of just two knitting stores that I am aware of in the Southside.”

Our next destination, Bluestone Gift Shop, has made headlines in The News in recent months after it was awarded Gift Retailer of the Year 2015 at a swanky do in London’s Savoy.

Sarah Park Patterson welcomed us into her family run store on Cross Arthurlie Street. It is filled with delicate trinkets, gift cards and heady scents from soaps and candles.

She tells the Labour MSP that Bluestone is bucking a national trend.

“We have seen a lot of other gift shops really suffer under the recent economic climate, but we have seen a year on year increase,” Sarah says.

“It hasn’t affected us too much.”

Sarah is the deputy chairwoman of the steering group, and her involvement stems from similar beliefs to Paul Santi — benefiting the community, businesses working together, driving down costs and mutual marketing.

However all of them want to see Barrhead thrive, and the steering group has already launched its self headfirst into discussions on kick-starting the festive feeling within Barrhead.

Lights, a Christmas parade, live music shows and a market have all been on the agenda as the group met in the cafe above Bluestone’s shop front.

Finally the tour ends at The Brigg Inn, to meet one of Barrhead’s most well-kent characters, Bud Gauld.

After enjoying a deserved refreshment, Hr Henry took a moment to reflect on the day.

He said: “Many of these places I have never been in to, and I find each of them completely fascinating.

“So much hard work has went in to each one, with a lot of professional and personal sacrifice.

“Barrhead has the population to support a thriving business community, and this is a positive step towards it.”

A vote on whether to take the BID forward will take place early next year.