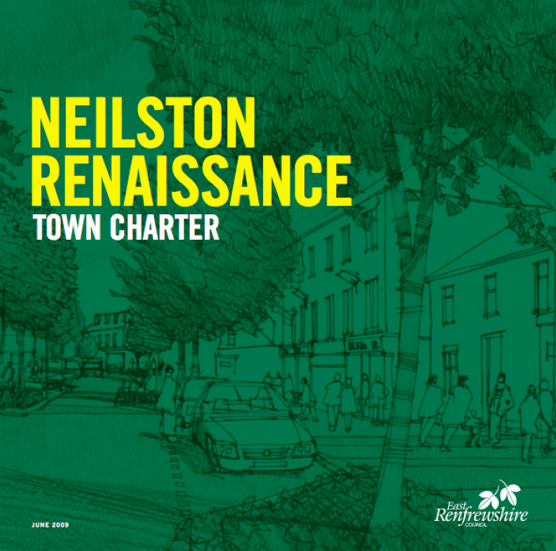 The Neilston Paradigm. An outstanding example.
Neilston is known as a former mill town on the western edge of Barrhead in Scotland. The town is proud for its significant textile and several related industries of the last century, however today heavy industry has died out and Neilston’s population barely reaches 5,000.

Despite the fact that Neilston is not getting any further development out of the industries that were flourishing in town during the past, it continues to grow as a dormitory town, supported by its favourable position between Paisley and Glasgow. However, Neilston's town centre and sense of self has suffered badly over time and it has had plenty of social problems, with several small but severe pockets of disadvantage. As a result, the local community realised that it should take action against the deterioration of Neilston as a town and proved that local communities can act as a catalyst in local development and the sustainability of a town.

In Neilston’s case, the Neilston Development Trust was created by local people in 2006 in order to serve the town and the residents of Neilston. It’s success and actual usefulness showed the communities can achieve substantial results and beneficial outcomes for a place and it people when adequately empowered. More specifically, Neilston Development Trust (NDT) is a charity and social enterprise and constitutes part of a nation-wide movement of local communities who want to build on their strengths and create a sustainable future for their place.

A ‘renaissance town’ approach has been used by the Neilston Developmnet Trust in Neilston and it constitutes community-led activities that aim to empower people to lead the regeneration of their own local town via Town Team. The ‘renaissance town’ vision for Neilston aims to ensure that Neilston is a successful, sustainable, well-planned and well-connected small-town transformed by local people in a remarkable way. In fact, Neilston Development Trust offers a model for small town regeneration through the quality of its physical transformation, sustainable development commitment and approach to community involvement and community asset development. The solutions design and development for Neilston was facilitated by a Charette format that was adopted instead of people making representation based on their own needs and interests. This brought different groups of people together in a collaborative approach. Regarding further specific eminently important actions, the Neilston town charter was launched in January 2009. One of the first activities was to issue all households with a postcard and red ribbon which should be tied to their favourite places. This immensely empowering approach was followed in order to provide residents, businesses, agencies and councilors with a clear visual sign of the priorities that people wanted to see addressed in practice.The Charrette approach which was adopted from the very beginning, included a series of meetings site visits to key building across the town and an array of informal discussions. Feedback and ideas were afterwards brought to the Town Team Group which had been established to oversee the project’s progress. Sessions were also held with young people, to get their views and input into the vision for Neilston.

The production of Neilston Town Charter included substantial consultation, engagement and development with local stakeholders, consultants, Architecture and Design Scotland (A+DS) etc. The quality of the Charter is highlighted by the Scottish Awards for Quality in Planning (an SAQP) award in 2010. Several Charter projects have been taken forward in the next years, but an appropriate delivery mechanism was appeared to be needed for further progress. Happily, the charter was formally handed over to East Renfrewshire Council's leader at the national conference on Scottish Renaissance Towns Initiative in June 2009 and was signed by a wide range of local stakeholders, including residents and community representatives, who developed a governance framework for the Charter process. It now presents a detailed and well-structured and deliverable 20-year vision for the regeneration of the town.