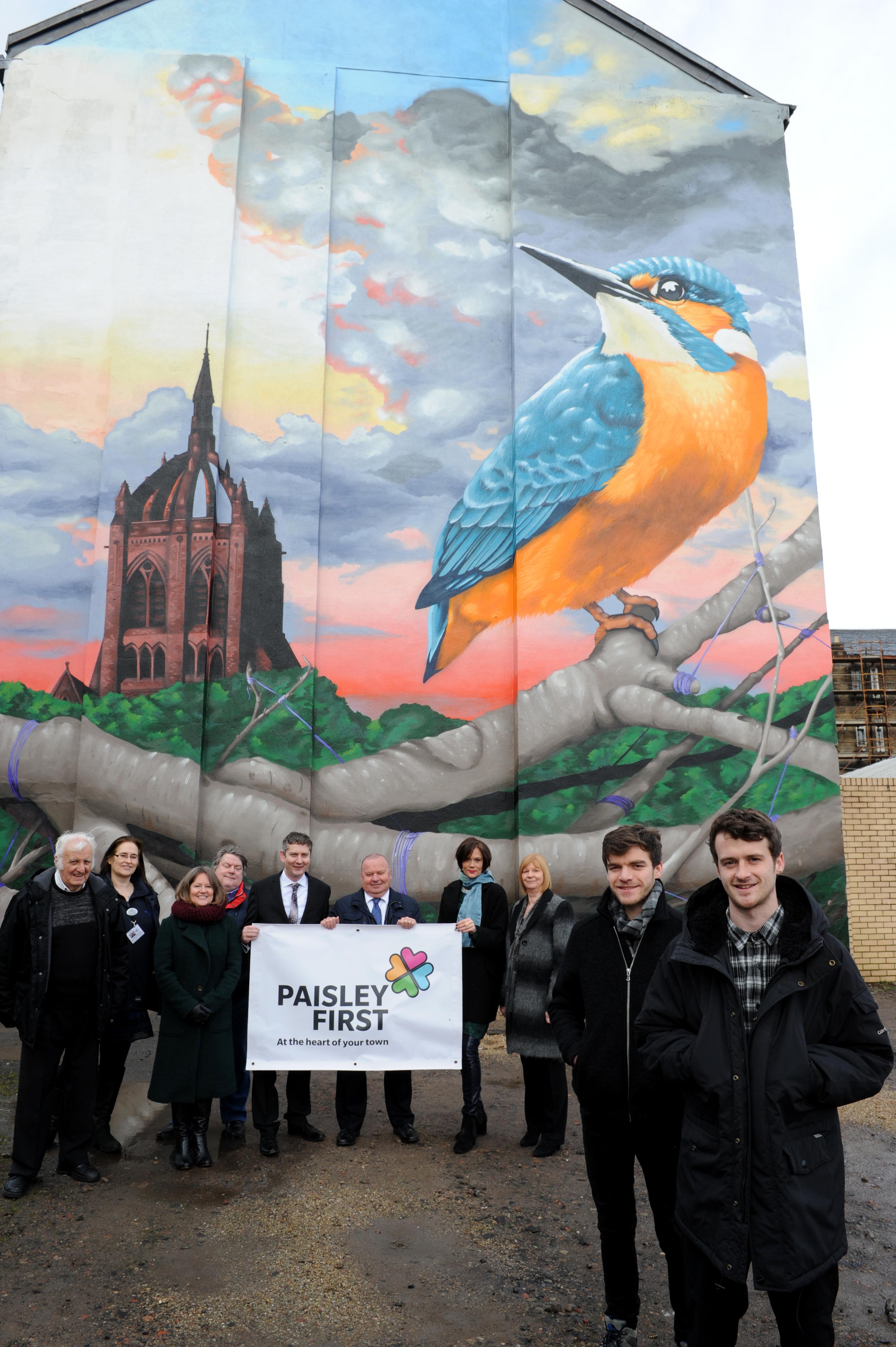 Paisley is set to become the first Business Improvement District (BID) in Scotland to have a gable end transformed into a giant mural.

The work highlights one of the town’s most eminent yet relatively unknown sons, Alexander Wilson, as well as iconic buildings and local wildlife.

Paisley First, the regeneration group tasked with breathing new life into the town centre, have launched the project to enhance the town's image and tap into the creative potential in Renfrewshire.

A number of walls have been identified for the murals which form part of a series and the first is situated at Johnston Street. It depicts a beautiful kingfisher perched next to thread woven in between the branches, while the distinctive Coats Memorial Church appears in the background.

The kingfisher, a bird that can sometimes be spotted on the Cart, represents the life and work of Paisley’s Alexander Wilson, who is credited worldwide with establishing ornithology as a science. Originally a weaver poet, Alexander Wilson moved to America where he studied wildlife and travelled widely, documenting and drawing hundreds of illustrations of birds.

The Coats Memorial Church, an iconic part of Paisley’s skyline, was built in memory of Thomas Coats, founder of the town’s biggest thread firm.

This mural is designed to amalgamate just some of Paisley’s rich historical and cultural past.

Paisley artists Mark Worst, 26, and Ross Dinnett, 25, have just painted the three-storey mural and have undergone special safety training specifically for the job.

Mark said: “At 16m, this is one of the highest murals I’ve ever painted and it’s certainly the most unusual. Ross and I had to do training to operate the scissors lift to get up and down the gable end. It’s some height up there. “

Paisley First project leader, Melanie Hughes, who has developed this wall concept with the artists from the start said: “Thanks to additional funding from Renfrewshire’s Cultural Events and Heritage Fund this is going to be the first of many murals in Paisley’s town centre. We’re excited to see the reaction from the local community and town centre businesses.”

"This should help make the town centre more appealing to potential businesses and visitors, as well as to Buddies themselves.”

"It’s a project that will help breathe new life into the town and hopefully, raise its profile. Ultimately, we want this project to increase footfall and encourage people to spend money in local businesses."

Melanie added: "By utilising the best of Paisley's artistic talent we hope to create a colourful and vibrant town centre that people want to visit. In the future, we’d like to involve more people in the process by collaborating with community groups too.”

Ian said: “We asked local artists to submit their proposals for various locations around the town and we’ve had some terrific entries.”

“Some of Mark's work can already be seen around the town in places such as Brown’s Lane where he has painted a spectacular mural on the outside wall of The Bungalow featuring Jimi Hendrix and John Lennon.”

"He has also painted another mural on one of the walls of the beer garden at the popular Paisley pub DeBeers and produced the art work on the shutters of the music shop in Causeyside Street. “

Train travellers in Glasgow might also have noticed his city mural which was placed on huge boards at Queen Street Station while the main line to Edinburgh was being renovated recently.

Mark's talents have also taken him abroad where he has also collaborated with other mural artists in Europe.

Paisley First would like to acknowledge the help and support they have received from Paisley Housing Association and its tenants who have been kind enough to allow us to use their gable end."

A spokeswoman for the association said: "We are delighted to support the installation of this mural which will bring beauty and energy to the local area. This statement piece showcases local artists and celebrates Alexander Wilson, his life and work, and his special place in the rich history of Paisley. “

"The association is committed to continuing its tradition of regeneration and improvement which boosts the local community and this Paisley First initiative is going to have a real positive impact on the town centre."