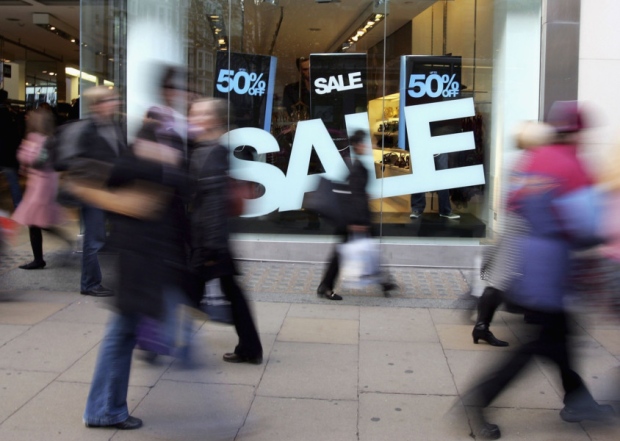 SCOTLAND’S high streets are under pressure, new figures suggest, with ­industry bosses warning of a “significant” gap emerging between consumer confidence north and south of the ­Border.

The latest sales monitor from the Scottish Retail Consortium (SRC) and KPMG – published today – reveals a year-on-year fall in takings last month when measured on both a total and like-for-like basis. UK-wide, there were gains on both counts.

Retailers will be hoping some Budget measures will close this gap

The dismal result follows Monday’s news of the worst footfall performance in five months, as high streets and shopping centres saw shoppers desert in droves. That would appear to have translated into poor takings during the month.

David Martin, head of ­policy and external affairs at the SRC, said: “Although non-food purchases performed comparatively ­better in June, consumer confidence slipped back in Scotland, opening up a significant gap in confidence north and south.

“Retailers will be hoping that some of the measures outlined by the Chancellor in his Budget earlier this month will help to close this gap as households start to feel the benefit of measures like the continued freeze in fuel duty and increased personal tax allowance.”

He said consumers had responded well to retailers “getting the offer right”, particularly on clothing and footwear. Travel products also sold well last month as consumers stocked up on holiday essentials before jetting off to sunnier climes.

However, even adjusted for deflation – measured by the British Retail Consortium-Nielsen shop price index – total ­Scottish sales fell by 0.4 per cent in June. On the like-for-like measure, they were down by 2.2 per cent.

David McCorquodale, head of retail at KPMG, which helps compile the data and also sponsors the report, said the comparative lack of sunshine last month had also played a part in dampening sales. “Scotland’s mixed weather and declining consumer confidence held back retail sales throughout June as retailers drove volume through heavy promotions,” he noted.

“Whilst the rest of the UK enjoyed more settled weather and strong sales growth, Scotland’s tills were rather more muted.

“The bright spots were in the home categories, where bigger ticket sales were welcomed, and in health and beauty as consumers stocked up for travelling to the sunshine.

“After a poor May, fashion sales did better in June but clothing retailers will be looking for a more sustained period of warm weather to bring a strong close to the summer season.”

McCorquodale added: “With many positive economic indicators emanating around employment, wages and housing, Scottish retailers will be keen to see these working their way to the high street before they themselves face the increased costs introduced by the summer Budget.”

Shares among retailers were sent reeling immediately after the Budget as investors feared the impact on results of increased costs, while experts have since warned over higher prices for consumers as firms seek to pass on the burden.