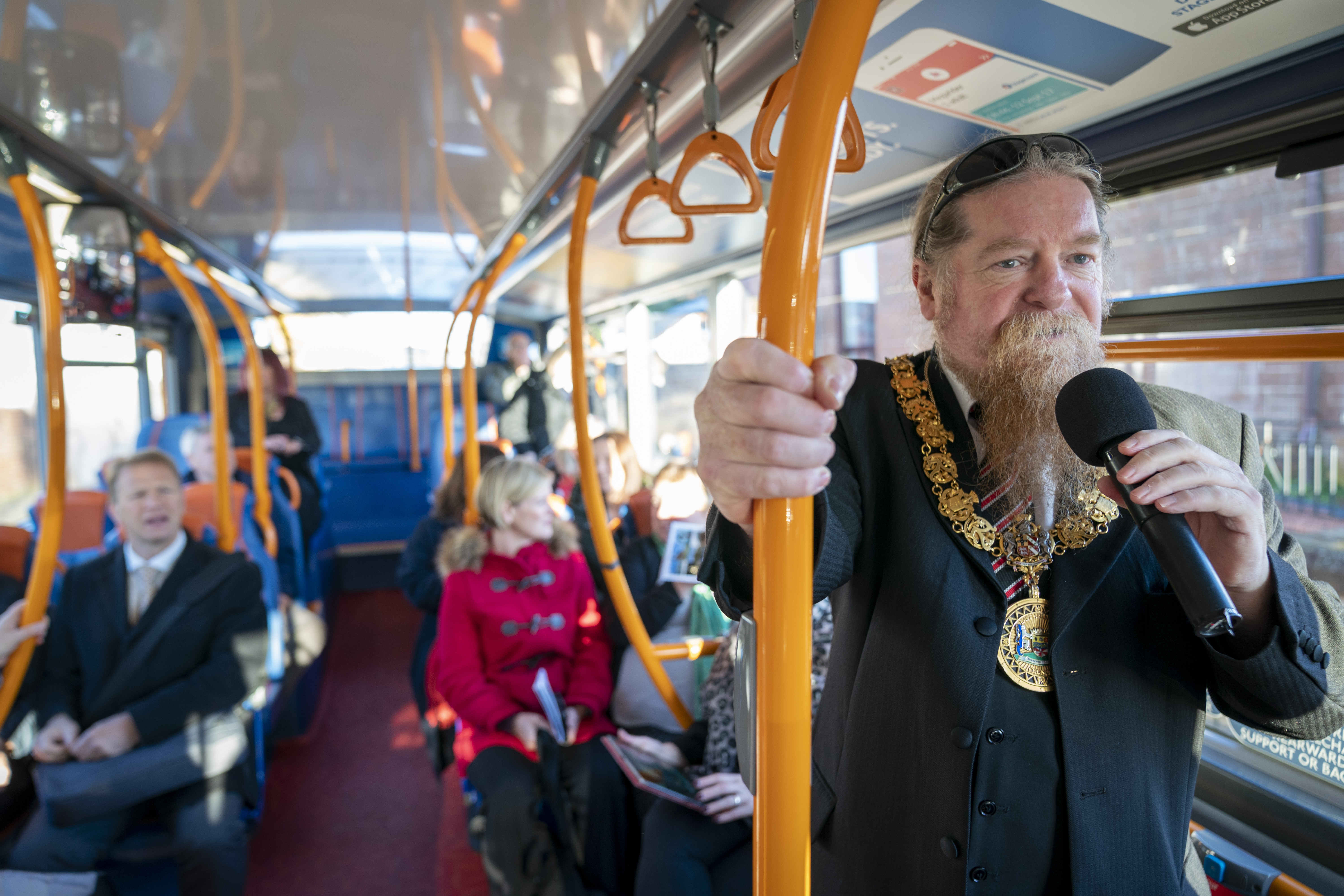 Scotland’s Towns Conference 2022: Double-decker bus tour gets event off to a superb start

But while Councillor Jim Todd is often seen on the streets of East Ayrshire riding his classic Triumph, he was instead out on four wheels as he welcomed visitors to a major event by hopping aboard an open-top bus to lead a tour of Kilmarnock.

He showed off sights, projects and developments that have helped transform the town and wider region on a tour which took visitors from the train station to CentreStage for the beginning of the 2022 Scotland’s Towns Conference.

Taking in places such as St Marnock Square and Rugby Park, the provost was joined by Kilmarnock Football Club’s mascot, Captain Conker.

Councillor Todd said: “We’re delighted to be rocking about town today as hosts of this great event. Like so many other towns, Kilmarnock has been through its fair share of change and hardship over the last few years, but the one thing which has kept us all going is the strength we draw from our resilient people, who’ve pulled together to work in partnership and tackle all the challenges of a changing townscape.

“Without limitless funds the public, private and voluntary sector have had to use some smart thinking to achieve our aims. And we’re proud to have led the way with initiatives like the East Ayrshire Gift Card and ShopAppy  which helped keep our local businesses going during lockdown and beyond.

“So today we’re keen to show off what we’ve achieved so far, but with an acknowledgment that there is much still to do. We hope by sharing our experience and listening to others we can all benefit from lessons learned and put our best feet forward as times get even tougher.”

The conference, organised by Scotland’s Towns Partnership (STP) in partnership with East Ayrshire Council, showcases the ideas, innovations and actions needed to secure a greener, stronger, more sustainable, future for the nation’s towns. It is a sell-out success, attended by 200 delegates from all over the country.

Work in East Ayrshire - including the transformation of the former Diageo site in Kilmarnock, the creation of CentreStage and other cultural initiatives - has been highlighted among examples of what can be achieved through collaboration and determination.

Other features of the conference day include a Scotland Loves Local Town Square, showcasing many of the organisations inspiring people to help build a better future for their area by thinking, choosing and spending locally.