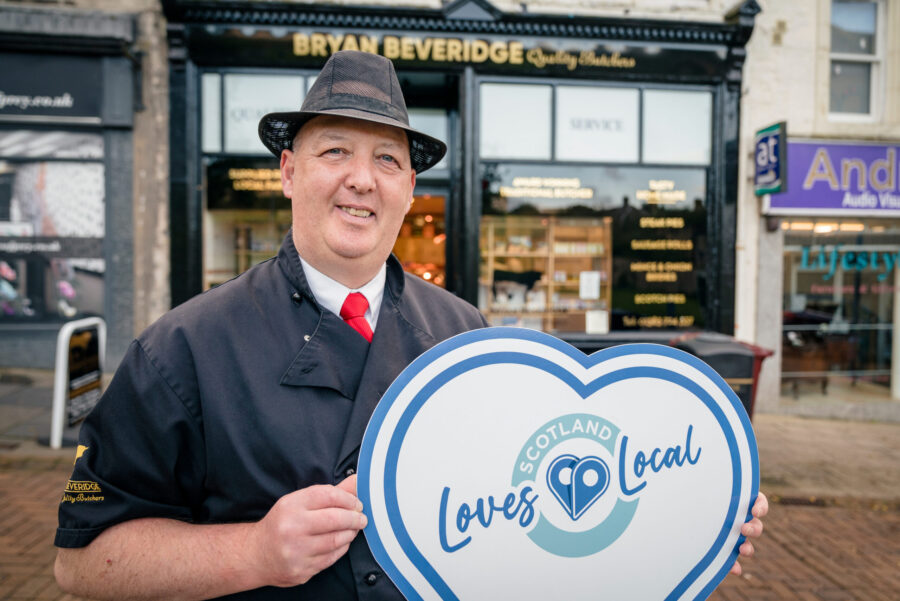 A butcher who took over his shop just weeks before Scotland went into lockdown and became a lifeline for his community has been named as the nation’s High Street Hero.

Bryan Beveridge not only managed to keep his business open, but has grown it and expanded his team despite the challenges caused by Covid-19.

He was announced as High Street Hero at the inaugural Scotland Loves Local Awards after judges heard of the tireless work he and his team have done since the onset of coronavirus – including at one point making 100 deliveries to customers every week.

The award was one of the highlights of an online celebration which shone a spotlight on the inspirational innovation which has not only seen communities through the worst of the pandemic, but is laying the foundations for a stronger future.

And they highlighted the vital need for people across the country to think, choose and spend locally to ensure businesses in their community survive.

Professor Leigh Sparks, Chair of STP, said: “You cannot fail but to be both humbled and energised by the fantastic work that all of our nominees are doing to create a fairer, stronger, more sustainable future where local life is the heartbeat of Scotland.

“They go above and beyond, day in, day out to help create communities which we will all be the better for and deserve this rich recognition. My congratulations go to all of our finalists.”

He said: “What an honour it has been to host the inaugural Scotland Loves Local awards and celebrate some truly inspirational local heroes. Congratulations to all those shortlisted and our fantastic winners, who each make Scotland a brilliant place to live and work in and are true assets to their communities.”

High Street Hero Mr Beveridge, 56, who has been in his trade for 40 years, launched Bryan Beveridge Butchers in the Dunfermline High Street butchery where he had worked for the previous 15 years on March 1 2020.

As the pandemic took hold, he and his team, who source all of their produce locally, launched a delivery service, set up a website and branched out into social media to serve customers.

It was an effort appreciated by the community – with customer numbers up by a quarter, allowing him to recruit an apprentice and factory manager.

Local councillor Helen Law was among those who nominated the veteran butcher and said: “Bryan has been a real hero during the pandemic.He was really in at the deep end, but he’s done a fantastic job.

“He really became a lifeline for the whole of the community. His shop’s fantastic and has gone from strength to strength.”

He said of his award: “It’s magic. I’m delighted. I’ve got great support from my staff. If they hadn’t bought into what we were doing it would have been chaos.

“I couldn’t be prouder. At the time when we were open last year, the last thing I was thinking about was something like this. It’s great to be recognised, but you’re only as good as the people behind you. I know it’s my name above the door, which is fantastic, but it’s the staff and public who’ve bought into this.”

Elsewhere, an alliance in the Highland community of Nairn took the Climate Town prize for its work spearheading the drive to net-zero.

And the creation of striking murals on historic buildings in Paisley to celebrate its past and inspire thoughts for the future saw it take the Creative Town accolade.

Natalie McShane, of Paisley First Business Improvement District, said: “There are more listed buildings in Paisley than anywhere else in Scotland outside of Edinburgh. It was great to be able to pay tribute to these wonderful buildings. There are some real hidden gems in Paisley town centre.”

A judges’ special award was presented to East Ayrshire Council and Kilmarnock Business Association for its trailblazing work on the East Ayrshire Gift Card, supporting local businesses through the worst of the pandemic. Its success helped inspire the Scotland Loves Local Gift Card, now being rolled out across the country.

Streets and Spaces, sponsored by South of Scotland Enterprise

The awards were also supported by STV.

STP is the organisation spearheading the Scotland Loves Local campaign, supported by the Scottish Government.

Keep up with all of the campaign latest by following #ScotlandLovesLocal on social media.

Find out how you can get involved in the campaign by clicking here.