14/02/2017 - A comprehensive upgrade to an innovative data tool providing in-depth information on Scotland’s towns was unveiled outside the Scottish Parliament in Edinburgh today. 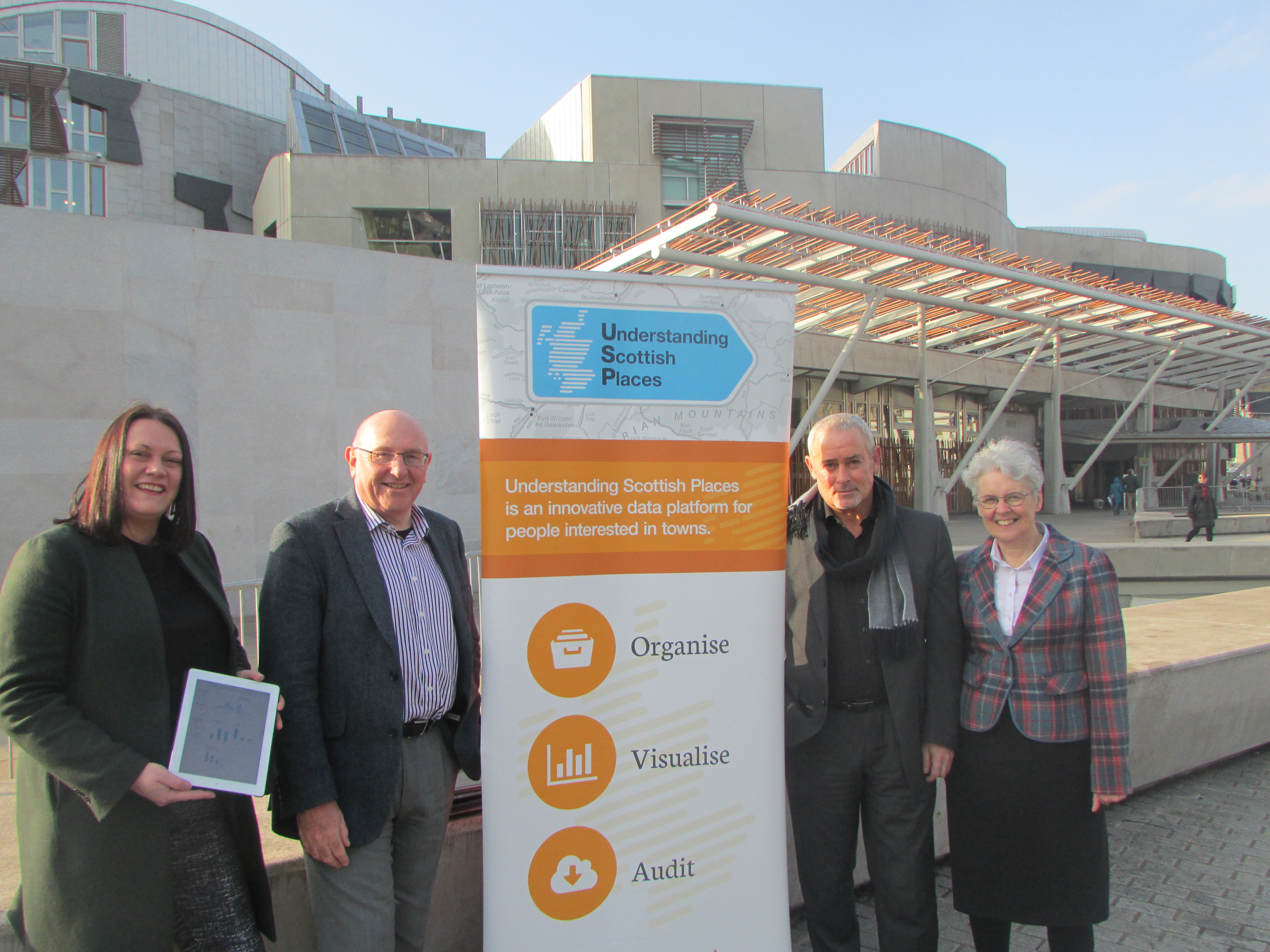 Senior representatives of the University of Stirling, Carnegie UK Trust, and Scotland’s Towns Partnership met to raise awareness of the benefits of the Understanding Scottish Places (USP) tool for all those interested in our towns. Minister for Local Government and Housing, Kevin Stewart MSP, and the Centre for Local Economic Strategies, also endorsed the launch.

Understanding Scottish Places allows users to view the social and economic profile of their town, and compare this with other towns in Scotland. Data is included for all towns in Scotland with a population of above 1,000: 479 in total. Rather than rank places as ‘better’ or ‘worse’, USP focuses on shared characteristics, and well as employing a unique ‘independent to dependent’ scale.

At today’s launch, the organisations behind USP unveiled the first comprehensive upgrade to the tool since its creation in 2015. In addition to the social, economic and demographic data previously available, users can now view information such as daily commuter flows, tourist accommodation capacity, and the amount of grant funding received by their town.

Furthermore, each town now has a unique description of its history, geography and economy. It is hoped that the new features will further enhance USP’s utility in supporting the development and regeneration of Scottish towns.

Since its introduction in 2015, USP has been used over 10,000 times by professionals, local organisations and other towns stakeholders to support their work. The tool is freely accessible to the public, and has been developed by a consortium of organisations comprising Scottish Government, Carnegie UK Trust, University of Stirling, Scotland’s Towns Partnership, and the Centre for Local Economic Strategies.

The tool has also been used in over 20 in-depth USP Your Town Audits, a comprehensive study which builds upon the USP output to give an individual town a much wider appreciation and understanding of its role, function and performance. The USP Your Town Audit has now become the standard benchmark for measuring the health of a Scottish town.

The USP Consortium now looks forward to receiving user feedback on USP 2, and to developing a further upgrade to USP later in the year.

“We have been closely involved in the creation of this new version of Understanding Scottish Places. I’m delighted it’s now available for use by all those who work to improve Scotland’s towns.

“There is some fascinating information on this website and I would encourage both professionals and members of the public to visit usp.scot to see how the tool could be used to benefit their local area. Its new features will support efforts to create flourishing places for all those who live, work in and visit our towns.”

“Two years ago we launched Understanding Scottish Places, which for the first time provided consistent and comparable data across 479 towns in Scotland. This unique resource has been informing decision making and debates about towns and town centre development across the country. We are now delighted to launch a major update of the site with enhanced data and functionality. The Institute for Retail Studies at the University of Stirling has been proud to be involved in USP from its conception and is committed to maintaining its integrity and usefulness.”

“Carnegie UK Trust is proud to have supported the development of this latest phase of Understanding Scottish Places. We know from the feedback received that USP is responding to a real need among all towns stakeholders for in-depth, comparative data on towns. We look forward to hearing from users about their experience of the new features in USP, which we believe will continue to support the creation of successful, inclusive places across Scotland”.

“Understanding Scottish Places is an evolving tool that makes the most of data to inspire better decisions.  We would now welcome suggestions from users as to what the next upgrade could contain. We would also welcome data providers and partners to support us to take this valuable data platform even further"

“The key to progressive local economic development is for towns to understand using evidence the extent to which they are independent or dependent on others for the provision of services or the assets available in that town. USP 2 handily helps towns to understand their levels of independence, inter-dependence or dependence and thus shape their own local economic approach accordingly; meaning that economic strategy is rooted in the town itself and not pre-conceived and orthodox approaches”.

USP can be accessed at: usp.scot

The Understanding Scottish Places platform was commissioned by the Scottish Government and was launched in April 2015. A comprehensive update to the tool, USP 2, was launched in January 2017. It offers a mechanism for understanding the similarity of places across Scotland. Deliberately designed to avoid a simplistic ranking of places as better or worse, USP focuses on the shared characteristics of towns.

The platform is formed of three parts. The first two elements have been created using national data sets - a new typology of Scottish towns, and an assessment of towns’ inter-relationships. You can find out more about these parts of the tool on our Methodology page. The third part of the platform is the USP Your Town Audit, which is designed to help users gather local information which complements the national data available through USP.

Understanding Scottish Places has been developed by a consortium of organisations commissioned by the Scottish Government. They are: Carnegie UK Trust, Scotland’s Towns Partnership (STP), the Centre for Local Economic Strategies (CLES), and the University of Stirling.

In January 2017, the USP consortium launched an updated version of Understanding Scottish Places. USP 2 introduces new indicators, features and improvements. More about the new indicators can be read here: https://www.usp.scot/StaticPage/AboutContact

The USP Consortium continues to develop USP, and is aiming to implement a ‘phase 3’ update to the tool in 2017. If you have any ideas, suggestions or data for possible inclusion in USP that you feel would benefit the tool, we would like to hear from you. Please see our contact details below.