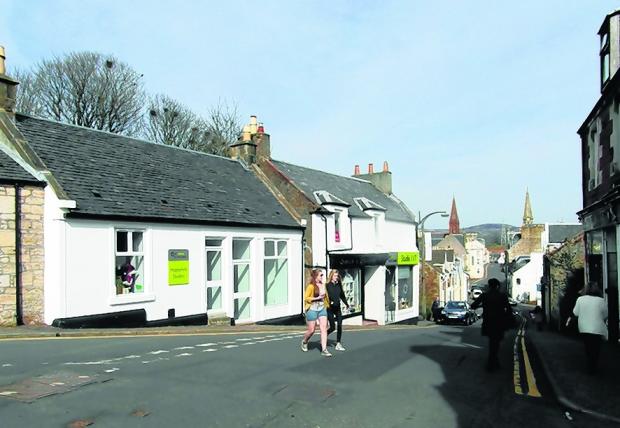 WEST Kilbride is the only Scottish finalist in this year’s Great British High Street Awards.

It marks a remarkable transformation from having a dilapidated village centre with half the shops boarded up to becoming a thriving community where the number of visitors has doubled in the last four years.

Over 230 communities entered the prestigious competition – almost double the entrants from 2014.

Only 21 have made it to the final, with West Kilbride the only Scottish community.

West Kilbride will be up against Brigg in Lincolnshire and Twyford in Berkshire for the title of Village of the Year.

Kay Hall, who led West Kilbride’s entry for the competition, said: “We’re delighted that West Kilbride has been selected for Britain’s best high street competition and we hope this will be a real boost for the village.

“We’re going to be pulling out all the stops to make sure local people know about West Kilbride’s shortlisting. We now need everyone to show their support and get voting.”

For the first time, the public has the chance to vote online at thegreatbritishhighstreet.co.uk or on Facebook.
If West Kilbride wins, not only will the community get a share of a prize pot worth £80,000, but they’ll win expert training and tailor-made tips from Google’s training taskforce – the Digital Garage on Tour – for their shops, bars and restaurants.

A spokesman for the Great British High Street team said: “By the late 90s, West Kilbride was struggling, and with nearly half of all high street shops boarded up, the local community was clamouring for change.

“Over the last 17 years, West Kilbride has been working to rejuvenate the high street, with clear aims and objectives from the outset. The opening up of a new craft centre in 2012 allowed West Kilbride to think creatively about the rejuvenation of empty shop space, whilst showcasing nationally acclaimed exhibitions and numerous public workshops.

“The effect this has had on footfall has been drastic, bringing about a staggering 117 per cent increase in visits since 2011. The effective branding as Craft Town Scotland has been instrumental in the recent growth, topping off nearly two decades of hard work.”
High Streets Minister Marcus Jones said: “We had a record amount of high-quality entries to this year’s competition – testament to the pride local people have and brilliant work being done to boost Britain’s high streets.

“The local high street is the life and soul of many towns, villages and cities across the country and these awards are a great opportunity to not only celebrate those that are the best of the best, but also to help others learn their valuable tips for success. If you cherish the hard work going on in West Kilbride then show your support and get voting.”

The Great British High Street Competition 2015 – sponsored by Boots, Costa, Post Office, Marks and Spencer and Tesco – is now in its second year and is one of a number of initiatives to help champion high streets as the cornerstones of the community.
These include a billion pound package of investment ranging from targeted business rate discounts, sensible planning changes and action that reins in over-zealous parking practices. The first Great British High Street competition last year saw 135 communities battle it out to be crowned the nation’s best. Belper in Derbyshire emerged as the overall winner. Belper found that winning not only boosted town pride, but also had a tangible economic impact with retailers reporting increased footfall.

As well as the public votes, the finalists will also be inspected by the Future High Streets Forum judging panel – made up of industry leaders from across retail, property and business .

This year’s competition also sees special recognition prizes for towns that have become ‘rising stars’, or local people who have made an invaluable personal contribution to their local high streets being launched. To go online to cast your vote, visit the Great British High Street website and follow @TheGBHighSt on Twitter. Voting closes in November.