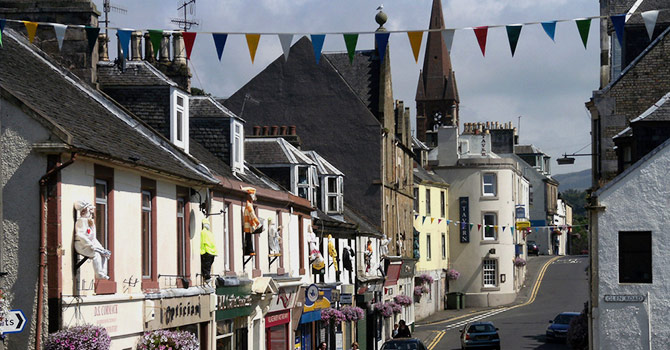 West Kilbride is now known for being Scotland’s only designated craft town and samples the wealth of craft and design talent from Scotland and the UK.

West Kilbride is a small town in North Ayrshire, on the west coast by the Firth of Clyde, looking across the water to Goat Fell and the Isle of Arran in Scotland. West Kilbride was once as a thriving coastal town and a popular holiday destination for Glaswegians. However, by the mid 1990’s more than 50% of the retail businesses had ceased trading and the town was really struggling. Following the decline of West Kilbride’s business activity, it was unanimously agreed that the town needed a specialised theme in order to revitalise itself.

As a result, the West Kilbride Community Initiative, was set up in 1998 to take forward the regeneration of the town centre. This has led and developed West Kilbride to be Scotland’s first designated Craft Town. This community inspired development has been a catalyst in the general transformation of the town centre and helped in raising the profile of West Kilbride as a better place to live, work and visit. West Kilbride is now known for being Scotland’s only designated craft town and samples the wealth of craft and design talent from Scotland and the UK. The town takes pride in a growing number of craft shops and studios, as well as several leading artists including Silversmith Marion Kane.

The Initiative Centre provides a convenient way for craftspeople to sell their art and craftwork, in return for a share of the profits. Craft Town Scotland is a model which promotes crafts at grass-roots level by embedding makers in the daily life of West Kilbride's community. The project creates a focus for craft and design by providing affordable studio accommodation for professional makers while exploiting niche retailing and tourism and encouraging new businesses and people to visit the town. West Kilbride has retained its sense of place in the face of decline and dereliction and contributed to a more creative Scotland in the process.

This photograph is by SeaDave on Flickr and is used with thanks via Creative Commons Licence CC-BY-2.0. We cropped the image to this size.