Three In Bloom groups hoping their efforts will bear fruit 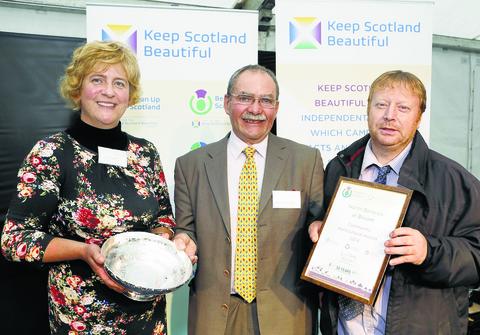 JUDGES will be walking the streets of three East Lothian towns in the coming weeks to determine if hard-working volunteers’ green-fingered efforts are enough to strike gold.

Dunbar, Haddington and North Berwick all won awards at the Keep Scotland Beautiful awards last year and will be aiming for more awards this summer.

Mary Young, chairwoman of Dunbar In Bloom, which lifted silver in the Coastal Town Category at last year’s awards in Dundee, was nervously looking forward to the judges visiting the town on July 27.

She said: “Dunbar In Bloom are again in the Scotland In Bloom competition.

“Judges are visiting on July 27 and we start with a presentation in John Muir’s Birthplace on Dunbar High Street at 9.30am.”

The judges will then receive a tour of the town, where they can inspect the horticultural efforts made by volunteers, ranging from groups such as Wingate Tenants and Residents Association (WTRA) to the local cubs and scouts.

Mrs Young, who stressed that a lot of hard work went into the year-long scheme, also encouraged local youngsters to stop pulling flowers out of planters on the town’s High Street.

She said: “They have been planted twice already.”

And they will be visited by Britain In Bloom in August, after they were put forward to represent Scotland in the prestigious competition.

Preparations are well under way for the judges’ visit, slightly later than the other county towns, early next month.

Anne Turgoose, committee member, said: “The In Bloom team is really gearing up for our visit from the Britain In Bloom judges on August 10.

“We have planned the viewing route, done partly on foot, to the minute, to ensure that we manage to highlight as much as possible within the three hours available.

“In addition to seeing horticultural gems, we hope that the judges will enjoy meeting some residents, including children, representatives from businesses, local groups and our valued volunteers.”

And members have been hard at work improving the look of the town’s railway station.

A book service has been introduced at the station and Ian Craigie has made a bookcase, with passengers now able to borrow, read and return books from the station.

Sheila Sinclair, NBIB secretary, said: “It is still early days but as someone who enjoys reading on rail journeys, I hope people will enjoy what is on offer, and we welcome feedback.”

The group celebrated a memorable debut year in the Keep Scotland Beautiful competition 12 months ago, when they scooped silver in the medium town section and also won the best new entry category.

Joe Forte, chairman of the group, was busy finalising the details for the judges tour on July 31.

He said: “We are excitedly looking forward to the judges visiting – I cannot think of better words you could use than that.

“Our group has really kind of established itself over the last couple of years and feel we have made good progress from last year.

“We have got an identity, with a logo made up, which will proudly be displayed in shops and all the shops in the town centre has a hanging basket.

“We’ve got another few valuable people onto the committee and it all helps with experience.

“We’ve got a few projects and Rab Moran and Ron Pearman have been busy over the winter with the oriental garden.”

The programme supports community groups across Scotland as they seek to improve and enhance their local environment.

Beautiful Scotland is a competition with an extensive set of categories and awards, and its winners can progress to the Britain In Bloom competition and thereafter to the international Entente Florale.