Town versus gown tensions over accommodation 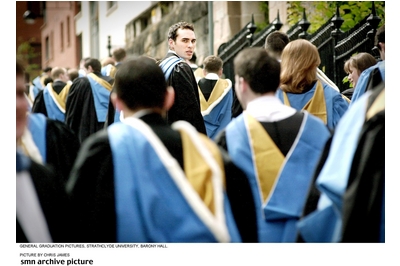 Professor Sir Tim O'Shea, principal of Edinburgh University, said private landlords across the UK were continuing to buy up flats traditionally occupied by families and renting them to students.

He said: "That can create tensions between the university and the wider community because it changes the dynamic of a particular area, particularly if the properties in question are allowed to become run down.

"Student numbers have expanded over the past few years and that can add to the pressure on housing and it is important that we seek to find solutions to that."

"There are examples in Edinburgh where derelict land has been taken and good quality student flats are built and that can take away the pressure on existing communities and can also lead to a regeneration," he added.

"Areas where dedicated student accommodation is built can be a boost to the economy because you see the opening of retail outlets, coffee shops and stores which can also be used by the local community."

He said: "We have a number of schemes at Edinburgh where students operate soup kitchens for the homeless or volunteering in hospices and the volunteers do a tremendous amount of work for the local community and that is recognised."

The report stated: "Cities such as Bristol, Edinburgh, Cardiff, Liverpool and Newcastle have all experienced strong rental growth of between three per cent and four per cent as a result of high-performing universities and acute undersupply of accommodation. Students.... generally take second hand housing stock or houses in multiple occupation."

In 2013 a study of housing pressures in St Andrews found that, while the success and growth of the 600-year-old university had brought prosperity and employment to Fife, existing pressures on local housing has been increased by an influx of students and staff.

The report, by university academics, found the increase had added to the "disadvantage" experienced by some in the local community, most importantly, people on low incomes who have had to look further and further from St Andrews in the search for affordable accommodation.

Gary Paterson, the organisation's vice-president for communities, said: "Finding affordable, quality accommodation for the duration of their course can be difficult and stressful for students, particularly when there are severe limits on the amount of housing available for communities as a whole.

Mary Senior, UCU Scotland Official, said: "Just as there is a real pressure on housing across different types of tenure nationally, then there is great pressure on student accommodation and housing around many universities.

"Where traditional student accommodation isn't sufficient to meet demand then students can be left to find their feet in the private rented sector where all too often the experience can be an unhappy one.

"The same also applies to many staff at universities, particularly for those on fixed term or zero-hours contracts for whom any chance of getting a mortgage is out of the question. We support the current campaigns to increase security of tenure in the sector and for rent to be pegged at an affordable level."